Welcome to the website of the Embassy of Canada to Algeria!

I am honoured to represent Canada in Algeria, a country with which Canada has had excellent diplomatic relations since 1962 and which is a strategic partner for Canada in Africa.

The quality of our relationship is demonstrated through partnership in a number of areas, including the global fight against terrorism. In 2011, Canada and Algeria participated in the launch of the Global Counterterrorism Forum (GCTF); since then our two countries co-chaired the West Africa Working Group for over eight years.

Algeria and Canada also enjoy a dynamic commercial relationship. Approximately 60 Canadian companies are active in Algeria in a number of sectors, from agribusiness to aeronautics and hydrocarbons to infrastructure. The commercial section of the Embassy provides advice and support to Canadian operators to better understand the Algerian market and facilitate partnerships with local economic actors.

Since my arrival in late 2019, Canada held the first EduCanada fair in Algiers in three years for prospective students at Canadian educational institutions. The Embassy also recently co-hosted a “Séminaire de Blé”, reflecting in part that Algeria is the biggest market in the world for Canadian durum wheat.  And since 2017, Air Canada has brought our two nations closer together by flying directly between Algiers and Montreal during the high season.

The Algerian-Canadian partnership is a great human adventure. An important Algerian diaspora in Canada contributes to the daily strengthening of ties through cultural, business, and other linkages. There are also thousands of Algerian students who choose to continue their studies in Canada in campuses from coast to coast, facilitated by a number of inter-university and inter-collegiate accords.

During my mandate, I look forward to meeting as many Algerians as possible, travelling throughout this magnificent country and deepening my understanding of Algeria, all the while promoting Canadian values and interests.

Algerians wishing to study, work, visit or immigrate to Canada will find a full range of services offered by the immigration section on this website.

At headquarters, he was Executive Director of U.S. Transboundary Relations, where he led the Government of Canada’s representation to the International Joint Commission. Most recently, he was Director General of the Trade Sectors Bureau.  Overseas, he served as Canadian ambassador to Morocco (with concurrent accreditation to Mauritania) from 2009 to 2012.

Dr. Wilkie has represented Canada in senior capacities on international investment and other issues, including at the WTO and UNCTAD, and as chief negotiator for FIPAs (foreign investment promotion and protection agreement) with China, new EU member states and other countries.

He has also worked at the Privy Council Office and Industry Canada in Ottawa, for the OECD in Paris, and for strategic consulting firms in Canada and Europe.

Christopher Wilkie was appointed as Ambassador to Algeria in 2019. 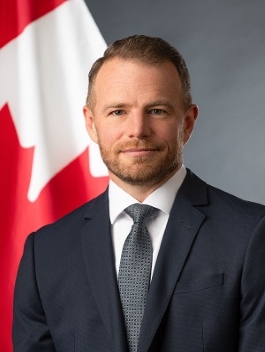