Aissatou, a victim of child early and forced marriage, shares her story with leaders from her community to help raise awareness and end CEFM. 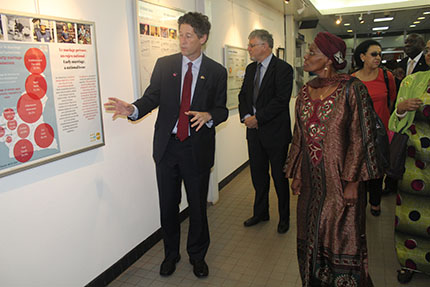 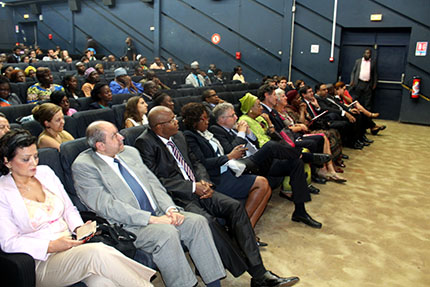 The audience were interested and had many questions for Aissatou.

At 14 years old, Aissatou refused to be sold.

At 20 years old, Aissatou wanted to become “someone” so that she could help other young girls avoid the suffering she endured.

Aissitou’s ordeal began 20 years ago when her father abandoned her family.  Assitou was left to care for her mother, also a child bride, meaning she was no longer able to go to school, something that she loved deeply.

An uncle came to the rescue and offered to help support the family. He was unable to save Aissatou from a 57 year old man who wanted her as his bride. Aissatou refused to marry and ran away. She was not captured but was forced to marry a 42 year old man.

During the course of the marriage, she experienced several brutal beatings from her "husband" and fell into a depression which saw her being sent back to her family as a pregnant young girl.

Aissatou worked tirelessly cleaning homes, saving money to survive while ignoring the cruel comments and bullying of others something that follows a “disavowed wife”.

Always fuelled by her determination and desire to return to school, Aissatou got the support she needed from her uncle who was impressed by her courage. Unlike most child brides, Aissatou resumed her studies where she left off, and succeeded a year later with great admiration of many including her teachers.

Sadly, Aissatou’s story is all too common, but one that needs to be told.

The High Commission of Canada in collaboration with UNFPA, UNICEF and the French Institute in Cameroon, hosted the "Girls’ Voices: Speaking Out Against Child Marriage, ” exhibit.

Developed by the Government of Canada, in partnership with Girls Not Brides, the exhibit is shares the untold stories of girls like Aissatou, forced into or at risk of child marriage, and the leaders, families and community members advocating for change alongside them. The event and Aissatou’s story revealed to community leaders, diplomats, civil society organizations, opinion leaders and religious leaders that this phenomenon is present in their national environment something that some found surprising. These leaders now understand the urgency and need for their involvement.