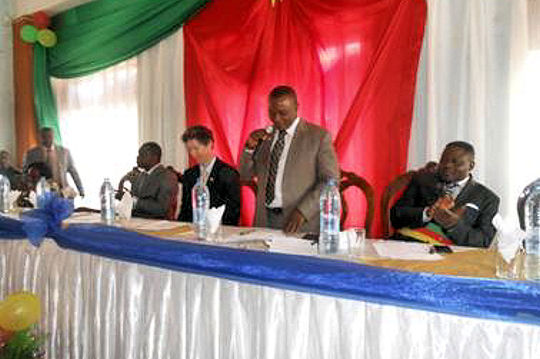 The representative of the North-west Governor (left) and High Commissioner René Cremonese (standing right) speak to the audience. 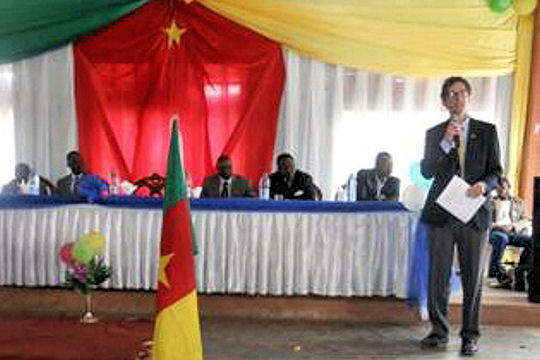 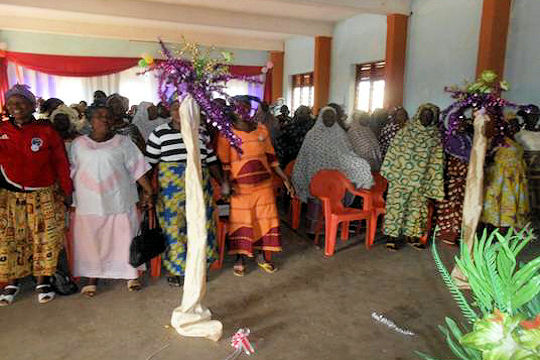 Many widows participated enthusiastically at the ceremony. 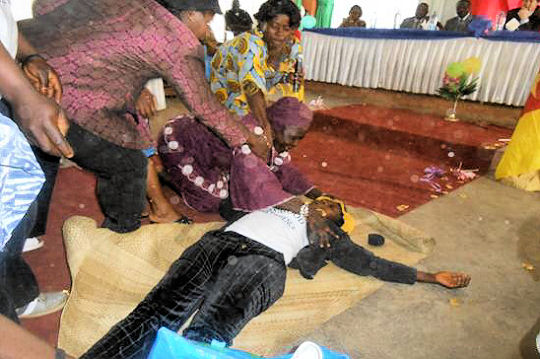 Nothing's better than a sketch to illustrate the suffering following the husband's death. 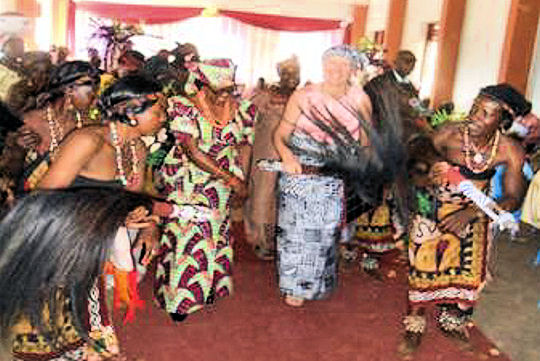 The spouse of the High Commissioner was honoured with a traditional title bestowed only to respectable leaders among the women of the community and dressed in traditional regalia for the celebration. 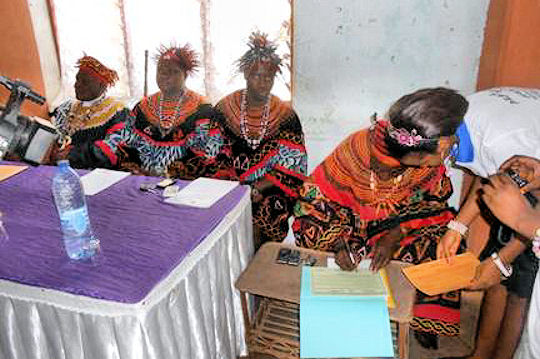 FON Bahmbi III, top chef of the Aghem, signed an agreement for the protection of the rights of widows under the gaze of colleagues.

Canada’s High Commission to Cameroon, through the Canada Fund for Local Initiatives, is supporting local human rights groups in their efforts to end the plight of widows and the child trafficking occurring as a result of these traditional customs. High Commissioner René Cremonese joined these groups in promoting human rights in the municipalities of Bamenda and Wum in the Northwest Region.

For widowed women in Cameroon’s Northwest Region, losing your husband often also means losing your property rights, your home, land, and sometimes even your children. Although protected by Cameroon’s inheritance laws, widows and their children often find themselves at the mercy of their communities and are treated without regard for their basic human rights.

In Wum, efforts focused on the suffering of widows and their children caused by traditional inheritance practices. In coordination with the Modern Advocacy Humanitarian Social and Rehabilitation Association (MAHSRA), the High Commission worked to raise awareness of the dangers of stripping grieving women and children of their basic rights and to promote the enforcement of established inheritance laws.

Canada’s involvement was highlighted at a public rally in support of MASHRA’s project in the Region. Canada’s High Commissioner was joined by a representative of the Northwest Region’s Governor, three hundred affected widows and traditional community leaders (or tribal chiefs known locally as Fons).

The rally marked the launch of MASHRA’s project and attracted support from all levels of Cameroon’s government and society. The event reinforced the rights of women with traditional community leaders, one of whom admitted that these, “savage rites are unbearable for [widows] and it is for traditional authorities to inform their communities that these acts are barbaric.”

At the event Fons, local administrative authorities and the NGO MASHRA signed an agreement committing them all to protect the legal rights of widows and orphans. In another landmark step, the leaders of the widow’s association agreed to take on the role of mediator between widows and local authorities. These commitments are important steps towards ensuring fair treatment of grieving widows in accordance not only with national laws but also with basic human rights.

Exploitation and Trafficking of Orphaned Children in Bamenda

In Bamenda, the High Commission addressed another aspect of the suffering caused in part by traditional inheritance practices – the exploitation of vulnerable children.

Mothers who have lost their homes and incomes often can no longer provide for their families. Under these circumstances many resort to handing over custody of their children to groups claiming to provide free education or paid work. These are not always honest claims and children may become lost in the child trafficking network.

Cinéma Numérique Ambulant (CNA) screened a series of documentary films to raise awareness of the potential dangers of releasing vulnerable children into the custody of organizations claiming to be committed to their wellbeing. The films documented the daily lives of children who have, in effect, become slaves to their new ‘guardians’ or have been taken in by a criminal organization.

These films were screened to the public in 23 different villages and city districts across the Northwest Region. Following each screening CNA engaged the audience in discussions on the issue and sought to educate parents and their communities on the potential dangers to their children.

CNA also hosted a workshop with local journalists in order to inform them of the extent of trafficking and exploitation of children in Northwest Region of Cameroon. This workshop resulted in engaged discussions amongst the large audience and is good indication of the success of the High Commission and CNA’s efforts to create local dialogue on this issue.

Canadian support for these activities in the Northwest Region was covered widely by local media and appreciated by Cameroon’s government, human rights groups, and the local communities, who see Canada as a leader in the field of human rights.