Family photo after the ceremony. 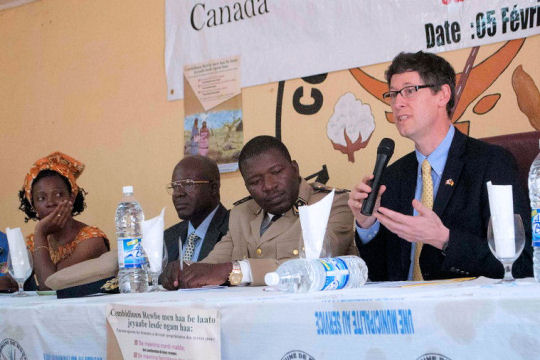 High-commissioner René Cremonese addresses the audience, with the sub-prefect and the mayor of Ngong on his left. 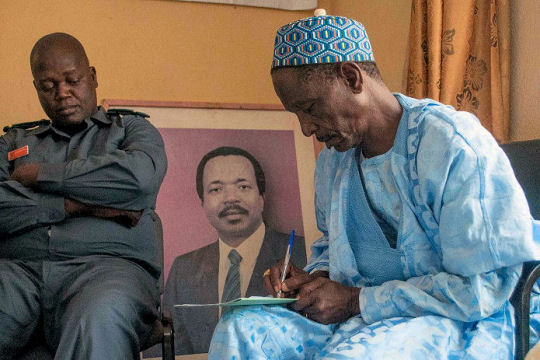 With his signature, the lamido of Tchéboa commits to promoting the cause of the women in his region. 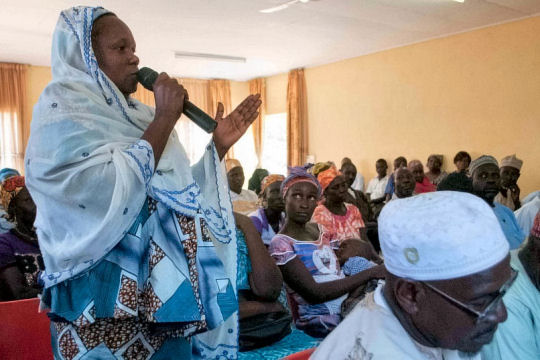 A participant describes the difficulties she faced while trying to obtain an ownership title.

In the North Region of Cameroon, as in other regions of the country, religion and traditional practices are intertwined, creating a difficult environment for women’s economic and social development. According to statistics from a NGO active in the North Region, the Femmes porteuses d’espoir (FEPES), though 80% of women in the North Region are involved in agricultural activities, less than 20% of these women own the lands they cultivate.

These women can lose their rights to these lands because of divorce, the death of their spouse or even in simple marital disputes. Most rural women are unaware of the legal provisions that protect them, because even local public services in charge of the protection of women don’t have the appropriate legal tools to advise women on their property rights.

The Canadian High Commission in Cameroon, through its Canada Fund for Local Initiatives, recently supported FEPES’s women’s rights promotion project in Ngong, near Garoua, the capital city of the North Region.

This project, entitled: “Rural women and land rights” was specifically designed to help the nearly 400 rural women in the district of Tchéboa access land ownership.

During this event, a memorandum of understanding (MOU) was signed in the presence of the Canadian High Commissioner, Mr. René Cremonese by FEPES, representatives of the women of the Tchéboa district, the local traditional tribal leader and public administration officials,.

The local traditional monarch, the lamido of Tchéboa, signed the MOU at his own request, even though originally, only the public authority representatives (the sub-prefect and the mayor) and the women were going to sign the document.

This MOU, although only symbolic in nature and not legally binding, represents the commitment of all of the parties to unite their efforts to promote women’s rights, especially land rights, within the context of a society that is known to be somewhat resistant to social changes that are perceived by some as destabilizing to the established order.

The lamido’s commitment was summarized by his statement during the event: “I am willing to listen to you, women. It is important that you be landowners as well.” As if to make his meaning clearer to his deputy heads, he repeated these words in the local language, which were enthusiastically received by the women who were present: “I call upon men to respect and be considerate of women, because they are our mothers. Stop harming women who are in a land dispute with their husbands. Instead, give parcels of land to women who ask for them.”

Initiatives such as the one launched by FEPES, are part of Canada’s commitment to gender equality and to promoting women’s rights across the globe. These goals can only be achieved if women are included as equal partners, decision-makers and beneficiaries of sustainable development in their society.

Canada’s High Commission in Cameroon will continue to promote these values and support women’s rights.

In a year or two, the concrete results of this project should be evaluated with FEPES, particularly those concerning the lamido’s participation in the advancement of these specific rights. This level of public commitment from the local traditional monarch has the potential to advance the position of women and as a result improve the economic well-being of the society as a whole.