Creating a new generation of leaders through scholarship and exchange programs 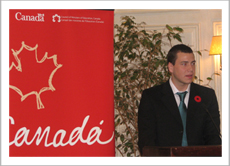 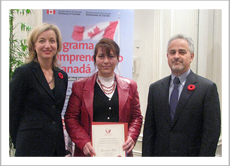 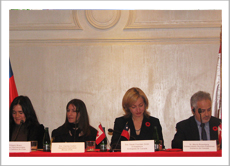 This year, over 100 Chileans received grants and scholarships to study or conduct research in Canada.

To celebrate the strong and growing relationship that Canada and Chile share in the field of education, Deputy Minister of Foreign Affairs Morris Rosenberg hosted a ceremony during his visit to Chile.

“These scholarships will help create a new generation of Chilean leaders who will have a Canadian experience. The exchanges will also contribute to the building of more ties between institutions in Canada and Chile.”  - Deputy Minister Rosenberg

For the second consecutive year, the Embassy of Canada in Chile organized this event to celebrate bilateral education links and to promote Canada as a study destination of excellence.

Chilean students and academics who were awarded grants or scholarships to study or conduct research in Canada this year were presented with certificates of recognition by Deputy Minister Rosenberg and Ambassador Sarah Fountain Smith. The students’ home universities or technical institutes were also recognized.

The Deputy Minister remarked on the tremendous impact of these exchanges stating, “Put plainly, through academic programs and exchanges, we learn together, from one another. We share expertise and experience. And we build the knowledge and the networks that foster innovation and promote progress.”

This year, these students received grants and scholarships through such programs as the Canada-Chile Leadership Exchange Program, the Emerging Leaders in the Americas Program, and the Canada-Chile Equal Opportunities Scholarship.

The ceremony was attended by more than 60 guests, including representatives from the Chilean government, NGOs, universities and technical institutes. Four former scholarship recipients shared their stories about studying in Canada and the impact that this experience has had on their personal and academic growth.

Scholarship recipient Manuel Campos, who spent a semester at York University, was not only impressed by the multicultural and modern city of Toronto, but also by the warm welcome he received from Canadians. He explained that he was also struck by the level of academic excellence at his Canadian host university.  “The professionalism I saw there was remarkable. Everybody followed a defined purpose in their studies and this is a lesson I will never forget.”

Academics who received Canadian Studies awards this year were also presented with certificates of recognition.  For example, Bernardita Blasco, professor in the Faculty of Law and Economics at Universidad Central, won a Faculty Research Program scholarship to conduct research about Canadian foreign policy as a foundation for Canadian trade policy in Latin America.

Deputy Minister Rosenberg also took this opportunity to thank the 11 Chilean institutions and NGOs that have invited Canadian experts to travel to Chile this year under the Understanding Canada Program.

The experts participated in seminars and conferences in a wide range of areas of mutual interest, such as lung cancer detection, sustainable green building, human rights, education as an integral element of development, and immigration, among others.

This moving and inspirational ceremony allowed those in attendance to witness first hand the tremendous benefits of educational scholarship and exchange programs between Canada and Chile, and to celebrate the diversity and success of our relationship in this area.