The "penguins" with the Ambassador of Canada, Patricia Fuller; Chile’s Minister of Economy, Felix de Vicente; and the Vice President of CORFO, Hernán Cheyre. 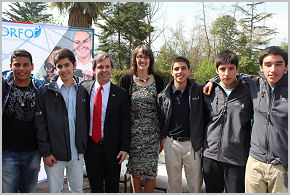 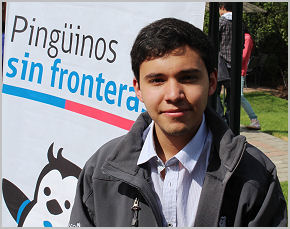 Aníbal Galleguillos, after speaking on behalf of all his colleagues. 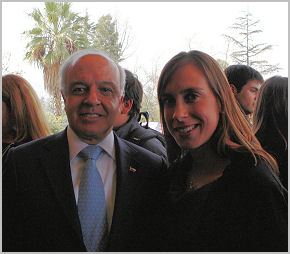 The Ambassador of Canada, Patricia Fuller, hosted a reception at the Official Residence to bid farewell to a group of forty high school students, members of the "Penguins without Borders" program, who will study during a semester in Canadian public schools. The event was attended by the students and their parents, as well as senior officials from the government, such as the Minister of Economy, Felix de Vicente, and the Vice President of CORFO, the organization responsible for this student exchange program, Hernán Cheyre.

During the warm and "youthful" farewell ceremony prior to their departure, the Ambassador expressed her confidence that the youth "are going to feel very much at home upon arrival in Canada, due to the hospitality and warmth of Canadians and because cultural diversity is a characteristic of our society." She highlighted the excellence of Canadian education "which is recognized throughout the world" and thanked the Chilean government for carrying out "this innovative exchange program, which further enhances economic ties, educational and cultural relations between Canada and Chile".

Within the framework of the Year of Innovation, the Ministry of Economy, in collaboration with  CORFO, selected the best grade 11 students, from various state-subsidized schools throughout Chile. "In Canada, you are going to obtain a wider global view of the world and increase your socio-cultural capital, as well as improve your English ", said the Minister of Economy, Felix de Vicente. He added that he felt a "healthy jealousy" for the youth’s opportunity to live in a foreign country such as Canada. "The human factor is the real inexhaustible resource of nations and programs like this, where young people have the opportunity to live in one of the countries with the best education in the world, help us to move forward Chile’s development."

Chile’s CORPFO’s Vice President, Hernán Cheyre, said that "this program rewards academic effort. We want to develop within our youth, an entrepreneurial culture that values the learning experience gained from a possible failure, that understands the importance of collaboration to turn ideas into projects, and also values the healthy ambition of high potential entrepreneurs".

On behalf of all students, Aníbal Galleguillos from John Paul II High School in the city of Calama, expressed his gratitude and excitement for this valuable opportunity. “I am sure that everyone will make the most of it; we will improve our English and learn from a culture that is more advanced than ours. It is important that we, young people, begin to change our mentality so that we are always one step ahead ".

The Canadian Association of Public Schools - International (CAPS-I) was responsible for the coordination of the school placements in Canada. The Chilean students will attend public schools in the provinces of Ontario and British Columbia, in cities such as Toronto, Ottawa, Victoria and Nanaimo, and other smaller ones, and will be welcomed by Canadian families for nearly six months.

All the selected students, also called "Penguins" for the color of their school uniforms (black and white), are between 16 and 17 years old, 52% are women and 93% live in cities outside of Santiago. In 2010, they obtained the best results in the SIMCE test, which evaluates their knowledge and command of English.