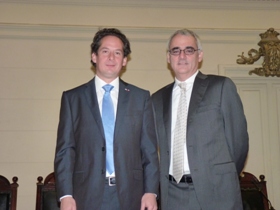 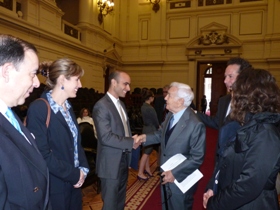 David Feuerstein, Holocaust survivor, shaking hands with the First Secretary of the Embassy of Israel, in the presence or representatives from the Ministry of External Relations of Chile, the Embassy of Canada, and the Chile-Israel Council. 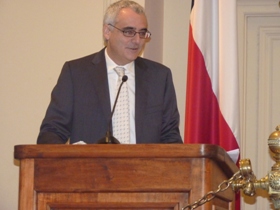 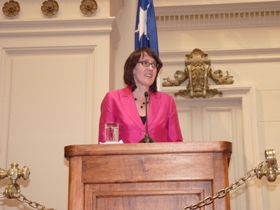 The Ambassador of Canada, Patricia Fuller, during the closing ceremony.

On October 28, 2013, the Embassy of Canada contributed, with its Post Initiative Fund, to the realization of the seminar “Discrimination: Obstacle to Chile’s Development” organized by the Chile-Israel Council with the support of the Chilean Senate.

Canadian expert Charles Asher Small, Director of the Institute for the Study of Global Antisemitism and Policy (ISGAP) in New York and of the Koret Distinguished Scholar at Hoover Institution, Stanford University, made the inaugural speech on Canadian multiculturalism and on Canada's commitment to human rights.

He showed how Canada has evolved from a colonial society to a country recognizing cultural plurality within it State apparatus and legal framework. He demonstrated the crucial importance of multiculturalism for the formation of democratic, peaceful and stable societies. He also discussed the laws against discrimination and for freedom of expression in Canada and the United States.

The Ambassador of Canada, Patricia Fuller, made the closing speech of the event aimed to provide a space for reflection on discrimination in Chile and, more specifically, on the Anti-Hate Speech Bill currently under discussion in Congress which would strengthen the Law against discrimination enacted in 2012.

The seminar provided a platform for debate on the rights in relation to religion and sexual orientation, and incitement to hatred through the media. The event counted with the participation of several well-known personalities in Chile, including: David Feuerstein, Holocaust survivor, Pablo Simonetti of the Iguales Foundation for the rights of homosexuals, Nicolas Copano, TV host, and Hernan Chadwick, Director of the National Television Council.

This was the first event on the topic to be organized at the Senate. Due to the growing importance of the issue in Chile, the Senate chose to make of it an annual event.

The Embassy of Canada in Chile supported this initiative as part of its commitment to share best practices on human rights and pluralism with Chile.

This support underscores the importance that Canada sees in freedom of religion, rights of homosexuals, and freedom of expression. The Embassy of Canada in Italy has been invited to support the establishment of ISGAP at the University La Sapienza in Rome.

Dr. Small also gave a lecture at the Hebrew Institute of Santiago and continued his South American tour in Buenos Aires where he notably participated in an event organized in the context of this year Canada’s Chair of the International Holocaust Remembrance Alliance.