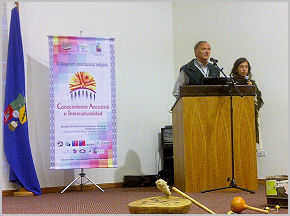 Paul Zakos during the inauguration of the Symposium with the translator 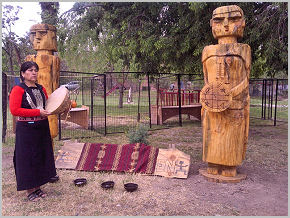 Maria Hueichaqueo, President of the Association Mapuche Taiñ Adkimn, during a commemoration ritual for the defunct « Machi » - spiritual chief – of the community 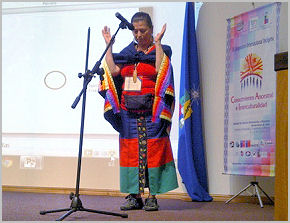 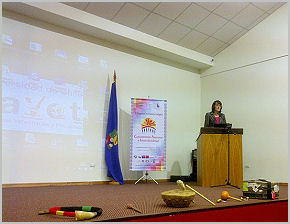 The Ambassador of Canada, Patricia Fuller, participating to the inauguration of the Symposium

For another year, the Embassy of Canada in Chile supported Chile’s International Indigenous Symposium entitled 'Traditional Knowledge and Interculturality', which was held on October 24-25 at University of Chile’s La Pintana Campus.

This symposium is the result of collaboration between Santiago’s Taiñ Adkimn Mapuche Indigenous Association, the First Nations Technical Institute (FNTI) and Ontario’s Loyalist College, which began in 2007 with a project financed by the former Indigenous Peoples Partnership Program of Canadian International Development Agency. This project allowed the application of the "Prior Learning Assessment and Recognition” (PLAR) – an adult education technique developed in Canada by Paul Zakos – to education programs for indigenous peoples, in order to acknowledge their cultural knowledge through programs recognized by educational institutions. The exchanges of knowledge that resulted from the application of this method leaded to the creation of the International Indigenous Recognition of Prior Learning Collective that now unites members from Canada, Chile, the United States, Mexico, Ecuador and Peru.

This year, Canadian participants were: Paul Zakos, founder of the PLAR and of the Collective, Glen Brouwer, Director of four schools in Manitoba’s Sunrise district, Banakonda Kennedy-Kish Bell, Ryerson, Toronto, McMaster and Trent Universities-consultant, Sharon Hobenshield and Janet Sinclair of the Vancouver Island University, and Heather Green of the Anishinabek Educational Institute.

The Taiñ Adkimn Mapuche Indigenous Association currently works with the Chilean Ministry of Education in order to make some curriculum changes, in particular to learning manuals. The Association also benefits from the support of University of Chile’s Faculty of Veterinary and Animal Sciences, which hosts the symposium every year and houses the "ruka" Mapuche, a traditional ritual house of the community. The Association also works in close collaboration with the Health Services Branch of the Southwest of the Capital in order to incorporate Mapuche healing practices as part of services offered to the Indigenous community, concentrated in the southern outskirts of the metropolitan area.

The Embassy of Canada supports this initiative as part of its commitment to share with Chile best practices on rights of indigenous peoples, to promote exchanges on education, and to promote cooperation between educational institutions.