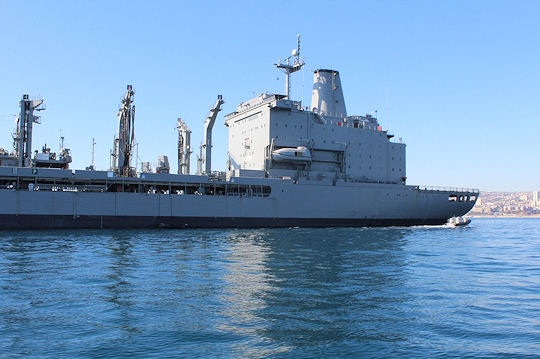 The ship Almirante Montt in Valparaíso before it set sail for Canada. 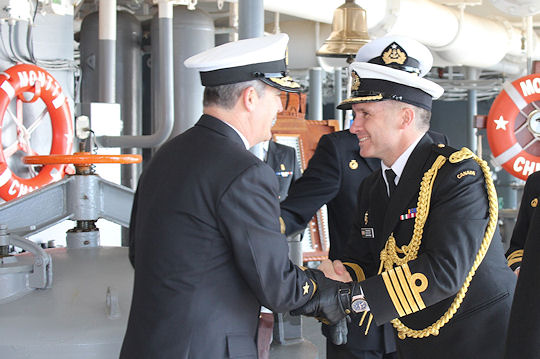 As part of a Mutual Logistics Support Agreement (MLSA) held this year between the Royal Canadian Navy (RCN for its acronym in English) and the Chilean Navy, in early July came to the Naval Base Esquimalt in British Columbia the oil tanker Almirante Montt, belonging to the Chilean Navy. The RCN saw a unique opportunity for this unit to be part of its fleet for 40 days, supporting its force generation requirements.

The purpose of ship is to establish other activity units at sea. The "Montt" has 42 thousand tonnes, fully-loaded, of transportation and is the largest ship that has been used so far, surpassing the battleship "Almirante Latorre", operated by the Chilean Navy from 1920 to 1958.

The benefits of this transaction for the RCN are very important, as the ship contributes to the objective of supporting the "Canadian Pacific Fleet", which operates since 1910 in the naval base of Esquimalt. About 4,000 military and 2,000 civilians work in this area that ensures security for the Canadian North Pacific seas and defends the rightful use of the seas and protects trade. The Pacific fleet is important to protect Canada as a maritime nation par excellence, bordering three oceans. This fleet has two submarines and 13 ships, supporting the Canadian national and international security operations.

Through the oil tanker Almirante Montt, Canada will continue to work with the Chilean navy and strengthen ties with Chilean officials who always provide a high level of professionalism and efficiency in their operations. These features are highly valued by the RCN, who sees the many common traits with the Chilean Navy regarding its operational capabilities. Chile also benefits from this exchange: the oil tanker will gain time at sea, and will also navigate through non-traditional waters in North America. The crew can exchange experiences and reach destinations previously unexplored by Chilean officers.

The bonds of friendship between the two armed forces are strengthened by such initiatives, as said Canadian Defense Attaché in Chile, Captain Martin Teft. "We hope that these relationships will pursue, as we have a lot in common, in terms of naval capabilities and operational methods at sea. Also, our seas share great geographical similarities".