Journalists in Morocco celebrate their accomplishments in the training workshops 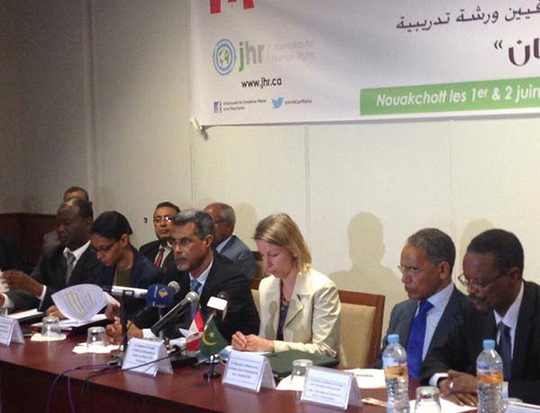 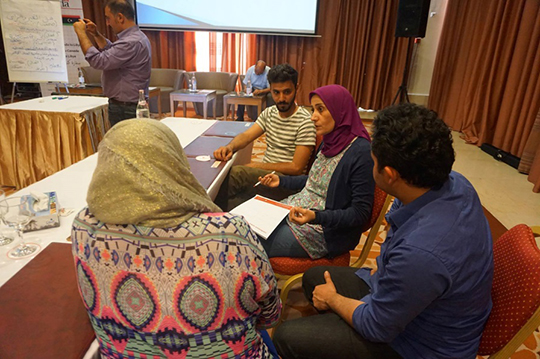 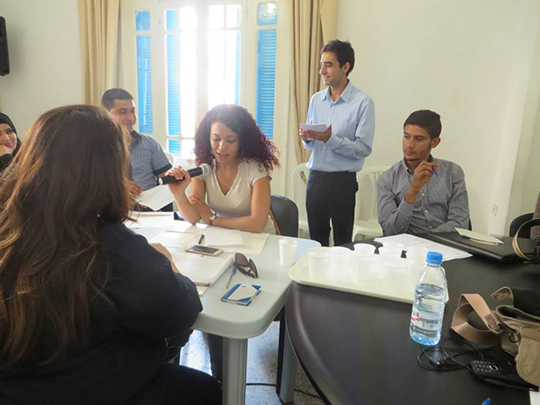 Freedom of information and an active, diverse and independent media are key for a democratic society.

Building on past successful journalist training programs in Algeria, Kuwait, Egypt and Ghana, Canada’s Embassies in the Maghreb region partnered with the Canadian NGO Journalists for Human Rights (JHR), UNESCO, and other local organizations to train local journalists about effective human rights reporting. JHR is a Canadian media development organization that helps journalists build their capacity to report on human rights and governance issues in their communities.

From June 1 to 12th, 2015, JHR trainers travelled throughout the Maghreb region to deliver two-day workshops to local journalists on how to investigate human rights issues and report on them effectively.

Speaking to journalists in Mauritania, human rights reporters in Tunisia and Libya, and influential voices in Morocco, local journalists engaged in discussions about human rights issues and international mechanisms of protection for human rights to help their reporting.

The discussion expanded beyond the walls of the workshop and into a digital dialogue through the hashtag #Canada4Rights. Social media users around the world joined the conversation by asking questions and sharing their thoughts on human rights reporting.

The first stop on the JHR training tour was in the capital of Mauritania, Nouakchott. The Canadian Embassy in Morocco (accredited to Mauritania) worked with JHR and the United Nations Office of Human Rights in Mauritania to train a group of over twenty local journalists.

Though media in Mauritania are among the freest in the region, local journalists had no shortage of human rights topics to debate. Discussions between the local journalists were lively and substantive, and they didn’t hesitate to discuss more controversial topics such as the legacy of slavery, violence against women and early, forced and child marriage. They also raised the challenges they face on a daily basis when carrying out their work.

The training was very well received by the local journalists and Canada’s Mauritanian partners. The Minister of Communication and Relations with the Mauritanian parliament praised this initiative for strengthening human rights in local media.

In the ongoing conflict in Libya, one of the many casualties has been free and fair media.

Due to the absence of experience and regulatory laws, the overwhelming majority of media outlets in Libya are not neutral to the conflict. Instead of exposing human rights abuses or reporting on stories that encourage reconciliation, the media’s non-neutral stance further motivates violence and hardens divisions.

To support neutral and professional reporting in Libya and in support of the confidence building measures coming out of on Ghadames dialogue, the Embassy of Canada to Libya coordinated a three-day workshop that brought together Libyan journalists with members of Libya’s Constitution Drafting Assembly (CDA). The workshop gave participants an opportunity to learn about ethics-based reporting on human rights and the media’s role in the conflict, while also discussing how the protection of human rights and the media can be addressed in Libya’s new constitution. This effort was coordinated with the United Nations Support Mission in Libya (UNSMIL) to support peace talks and reconciliation processes, and the training was delivered in concert with UNESCO.

During the training, journalists met with visiting members of the CDA to engage in an active discussion on the constitution drafting process. Because freedom of movement and the ability to communicate with individuals in different parts of the country are restricted by the conflict, the workshop provided an important opportunity for both groups to exchange information. Journalists informed the CDA members of the abuses occurring on the ground, and advocated for stronger protections for human rights and the media within the constitution. Meanwhile, CDA members discussed the constitution drafting process and the challenge they currently face while writing a constitution during conflict.

The third stop on the JHR training tour was Tunis, Tunisia. The Embassy of Canada to Tunisia, along with JHR and the National Syndicate of Tunisian Journalists (SNJT), held a two day workshop with experienced Tunisian journalists from public and private media to exchange best practices on human rights media reporting.

Since the 2011 Tunisian Revolution, much progress has been achieved to protect the right to freedom of expression, which is now enshrined in the new 2014 Tunisian Constitution. Along with this development, there is growing demand for the creation of a code of journalistic deontology for Tunisia.

For the fourth and final stop on the JHR training tour, the Embassy of Canada to Morocco organized a training session for over twenty Moroccan journalists. The National Human Rights Council was the key local partner for the Embassy for this event. Ambassador Sandra McCardell opened the training, highlighting that Morocco and Canada share common positions and objectives in advancing the promotion and protection of human rights domestically and internationally, and that Canada supports Morocco as it makes important progress in the democratic process it has embarked upon. Journalists in Morocco can be subjected to legal or economic sanction restrictions if they are too critical in their reporting. This has resulted in self-censorship and a reluctance to publish reports in the press about certain human rights issues.

The training helped to address this gap by providing journalists with a better understanding about human rights violations, and pragmatic and professional reporting approaches.

The JHR training tour in the Maghreb region reaffirms Canada’s commitment to promoting human rights globally and to expanding freedom worldwide. Canada looks forward to continuing its partnership with JHR to further the essential role of journalism in society.