Standing up for LGBTQ2 Rights in Guatemala 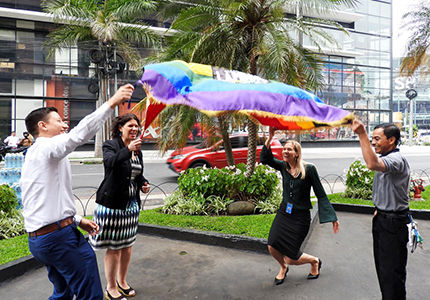 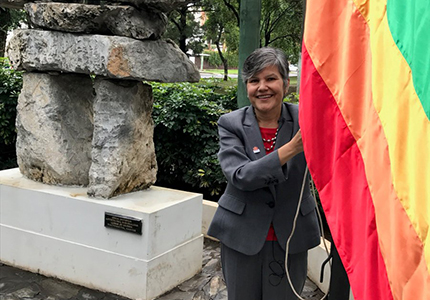 Ambassador Deborah Chatsis raises the Pride flag in the first ceremony of its kind for the Embassy of Canada. 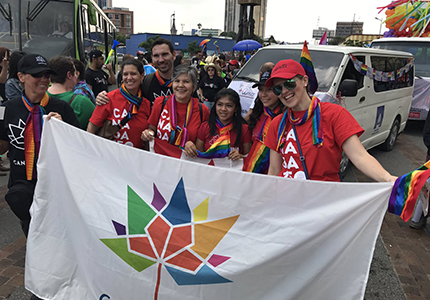 Embassy of Canada staff stand up for Pride in Guatemala. 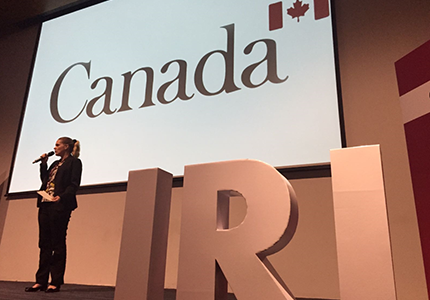 The Embassy of Canada gives opening remarks at a forum on crime and violence prevention, an issue especially relevant to the LGBTQ2 community.

Located on a pedestrian, tree-lined pathway along the central and highly frequented Las Américas Avenue, Plaza Inuk Shuk is a space lent to the Canadian Embassy by Guatemala City’s municipality, which features a Canadian flag and an Inuk Shuk monument.

On June 19th, the space also welcomed the raising of the Pride flag, which was the first ceremony of its kind for the Embassy of Canada to Guatemala. Ambassador Deborah Chatsis and representatives from LGBTQ2 civil society organizations active in Guatemala raised the Pride and Canada150 flags next to the Canadian flag.

"No matter who we love or how we identify, all of us deserve to feel safe and secure, live free from discrimination and persecution, and express ourselves fully."

Discrimination and homophobia remain widespread in Guatemala. While laws against homosexual activity were removed in 1871, Guatemalan legislation still does not allow marriage or civil unions between people of the same sex.

The LGBTQ2 community continues to face barriers in accessing education, employment, and healthcare. Violence against this vulnerable group remains common. In 2016, the Inter-American Commission of Human Rights reported that Guatemala had the second highest rate of murders against transgender people in the hemisphere.

Despite these challenges, slow progress is being made, including the development of public policy by Guatemala’s Human Rights Commission to protect the rights of LGBTQ2 people.

Embassy staff were proud to participate in this year’s Pride March in Guatemala City. With an estimated crowd of 25,000, it was the country’s largest celebration yet; the festivities were a stark contrast to Guatemala’s first Pride March a decade ago, where a small number of participants reportedly hid their identities for fear of reprisals.

The Embassy of Canada supported local organizations and projects championing LGBTQ2 rights throughout Pride Month. Canada’s Ambassador to Guatemala, Deborah Chatsis, invited representatives from local LGBTQ2 organizations to the Embassy in order to learn more about the current situation and ways that Canada can support Guatemala’s LGBTQ2 communities. The civil society organizations used the Embassy’s work, especially the raising of the Pride flag, to show the growing universal acceptance of LGBTQ2 rights.

With funding from Canada’s Peace and Stabilization Operations Program, the International Republican Institute organized a forum on crime and violence prevention. As common targets of violence and discrimination, this discussion was especially relevant to the LGBTQ2 community. Participants discussed the importance of women, youth, and LGBTQ2 representation on municipal security councils and the development of culturally-sensitive responses in the criminal justice system. The Embassy was proud to help organize and give the opening remarks at the well-attended event.

Canada believes that inclusion, through respectful policies and programs, allows us to unlock the potential of a diverse population. When everyone is able to participate, societies are more peaceful, prosperous, and free. The Embassy of Canada is a strong advocate for LGBTQ2 rights and will continue to work with partners to combat violence and discrimination that target individuals based on their sexual orientation and gender identity.