Refugees and Civic Integration – How do we ensure success?

The panel was opened by Marie Gervais – Vidricaire Ambassador of Canada in Germany and State Secretary Hans-Georg Engelke of the Ministry of the Interior. 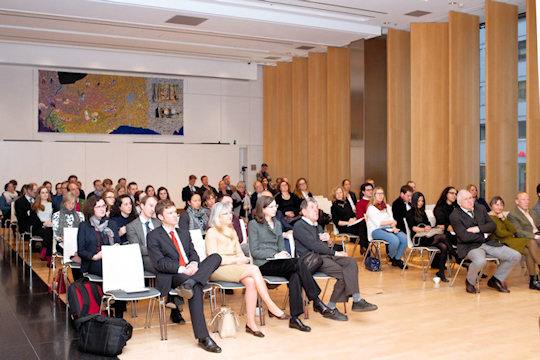 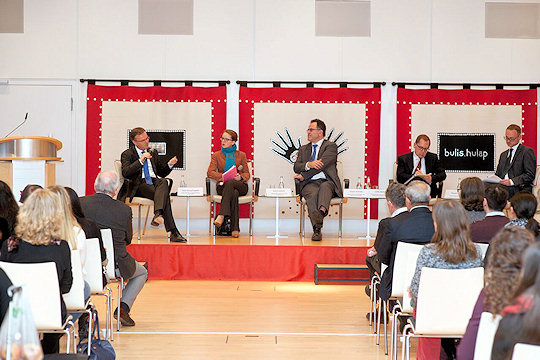 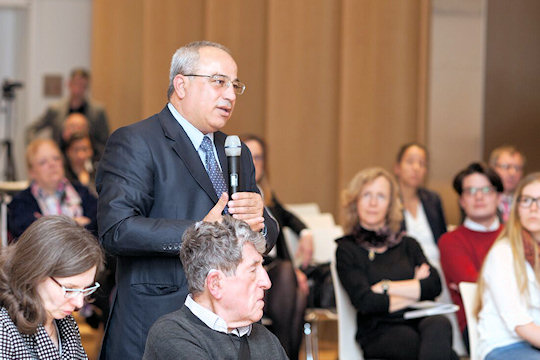 A European-Canadian Dialogue and Exchange of Ideas

Canadian researcher Leslie Seidle, Research Director, Forum of Federations and the Institute for Research on Public Policy made stops in The Hague, Berlin and Vienna, this initiative was supported by the Post Initiative Fund to discuss refugees and civic integration.  This roundtable and panel discussion entitled “Refugees and Civic Integration:  How do we ensure success?” was hosted by Canadian Embassy of Berlin in cooperation with the (Ottawa-based) Forum of Federations and the influential Expert Council of German Foundations on Integration and Migration (SVR Migration).  The expert roundtable included over twenty policy-influencers from German federal and state ministries and agencies, parliament, think tanks, foundations, political parties, and academia.  The panel was opened by Marie Gervais – Vidricaire Ambassador of Canada in Germany and State Secretary Hans-Georg Engelke of the Ministry of the Interior.  Feedback from participants was exceptionally enthusiastic as they engaged in dialogue on comparing and contrasting federal countries facing similar challenges and opportunities related to migration and integration. Alongside Seidle was Gianni d’Amato, Director, Swiss Forum for Migration Studies; Romed Perfler, CEO, Austrian Integration Fund; and Astrid Ziebarth, Migration Fellow, German Marshall Fund.  The dialogue emphasized best practices and outlined Canadian experience with the integration of migrants and refugees. While everyone realized that the geo-political context in Canada differs from that of Austria, there was a dynamic exchange and sincere interest in lasting linkages. One of the factors that triggered particular interest among Austrian interlocutors was the positive public attitude towards newcomers in the Canadian society.

While public and political debate in Germany has focused largely on how to ensure linguistic and labour market integration, discussions have increasingly turned to civic integration, or how to ensure that refugees adopt, contribute to, and benefit from the rights and responsibilities of liberal-democratic societies.  The panel acknowledged labour market participation as essential but not sufficient for integration, they advocated for broader civic integration, although definitions seemed to vary between Canada and European countries largely based on expectations with respect to citizenship. Seidle noted that in Canada we speak of “inclusion” rather than “assimilation.”  For him, civic integration meant making sure immigrants had the skills and motivation to actively engage within the new society, through participation in organizations (such as community or volunteer organizations) and political engagement.

One distinction between Canada and many European countries is the extent to which refugees and asylum seekers are able to become citizens or benefit from long-term protection. The speakers discussed the difference in Switzerland, Austria, and Canada; a common theme to the discussion was the importance and emphasis on strengthening social cohesion.  Engelke stressed that integration goes well beyond employment, and is ultimately about the human dimension, that is, the ability to live together harmoniously. Seidle added that the security dimension cannot be ignored, especially since, in contrast to Canada, which was able to vet and select Syrian refugees from UNHCR camps, most of the refugee flows into Europe have been uncontrolled, and it has taken countries like Germany time to put in place adequate identification and registration procedures.

Integration is a two-way street and the role of the receiving society is to keep the door open.
Leslie Seidle

Key challenges for all countries include low education and work skill levels of refugees, recognition of foreign credentials, funding, and security in light of many unregistered migrants in Europe. However, the panel was hopeful for countries ability to achieve successful integration. Successful integration requires strong political leadership and a convincing narrative jointly developed by government and society – the speakers acknowledged the importance of a commitment to social cohesion and of the constitution of a country in defining its values and creating trust between people.  The roundtable provided a forum for focused discussion to share lessons related to the socio-political integration of refugees and to provide concrete examples of good practices from different federal countries. The program exemplified Canada’s model role in successful immigration, migration and refugee policies as well as its well-functioning welcome culture and integration strategies.