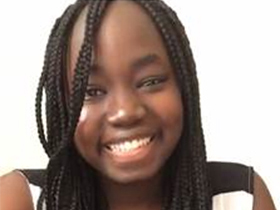 Ndeye Fatou Samb of Birago Diop High School one of the 6 winners from the video competition. 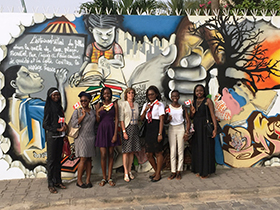 The photoshoot with the six finalists in front of the Mural at the Canadian Embassy to Senegal. This reflected the possibilities that come when girls in Africa have access to education. 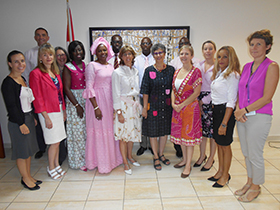 The Canadian Embassy sported a rose to show solidarity on this day dedicated to girls.

Girls in Africa continue to suffer disadvantages throughout their lives due to the simple fact that they are girls.

In 2015 in Senegal, it was estimated that only 37% of girls enrolled in school, with the majority dropping out by secondary school. Girls are often excluded from education systems due to unintended marriages and pregnancies, as well as unfavorable school environments such as a lack of separate girls and boy’s washrooms.

On the occasion of International Day of the Girl the Canadian Embassy to Senegal, in collaboration with Plan Canada, organized a video competition to empower girls to advocate for social change regarding gender inequalities in Africa. In turn, this helps promote girl’s educational rights, and encourage young girls in the region to stay in school.

Two schools in the region participated in the competition and invited ten girls to submit a one-minute video with their thoughts on the importance of the day and to share on what they would do to ensure that all girls have access to education if they held a position of leadership in Senegal.

In addition to the video competition, Ambassador Lise Filiatrault invited six students, who were deemed winners of the competition, to a photoshoot in front of the mural painted as part of the #WallsCANBloom campaign. These photos held significance and reflected the positive image and possibilities that come when young African girls have access to education.