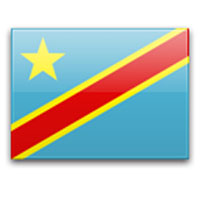 Canada in the Democratic Republic of Congo

In the DRC, Canada is represented by the Canadian Embassy in the Democratic Republic of Congo. The first Canadian ambassador was accredited in the DRC in 1962 and the embassy in Kinshasa opened its doors in 1965. The Embassy was closed from 1993 to 1997 to protest against human rights abuses by the Mobutu regime.

Democratic Republic of Congo in Canada

The Democratic Republic of Congo has been represented in Canada by an embassy in Ottawa since 1965.

Both countries collaborate in multilateral fora such as the Organisation internationale de la Francophonie, and the United Nations.

Canadian mining investments in the DRC are important, however, the business environment poses serious challenges to Canadian companies.

Trade relations between Canada and the DRC are modest. In 2018, Canadian exports reached nearly $15.1 M, while imports were close to $99.9 M. The top exports to the DRC are textiles, machinery, transport equipment and meat. The majority of imports is copper.

There is currently no trade agreement between both countries.

Canada has a development program in the DRC that prioritizes sexual and reproductive health and respect for the rights of women and girls, the protection of children and youth, and support for good governance. Canada is also supporting the fight against impunity for sexual and gender-based violence in order to challenge harmful and discriminatory social practices and provide assistance to thousands of women who have been victims of sexual violence. An important portion of Canadian international aid is delivered in the form of humanitarian assistance to populations affected by the conflicts in the DRC. Overall, Canada has contributed approximately $ 113 M (2017-2018) in international aid to the DRC. The DRC ranks 10th among countries receiving Canadian international aid. For more information on development projects with the DRC, see the Project Browser.

Canada is concerned about human rights violations in the DRC, including acts of sexual violence, as well as conflicts and violence especially in the eastern part of the country. The DRC hosts the largest UN peacekeeping mission worldwide, MONUSCO, in terms of authorized deployment. In December 2019, the United Nations Security Council extended MONUSCO’s mandate (resolution 2502) until December 2020. The mandate maintains the dual core tasks of the mission: protection of civilians and supporting the stabilization and strengthening of the DRC’s state institutions.

Since 2011, Canada has provided more than $ 340 M (USD) in assessed contributions to MONUSCO. There are currently nine officers from the Canadian Armed Forces deployed to MONUSCO, they are experts in military operations, liaison and training. They serve in two places: at MONUSCO headquarters in Kinshasa, and at the secondary headquarters in Goma.