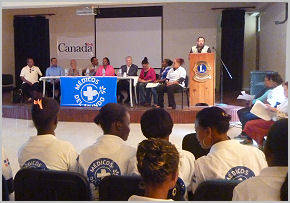 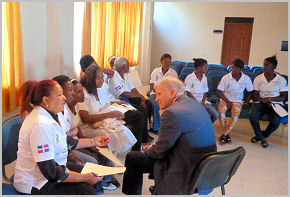 Ambassador Georges Boissé talking to the members of the association of women.

December 12, 2013, Comendador, Elias Piña: The Canadian Fund for Local Initiatives launched the project  “Preventing and Detecting  Violence Against Women in Elias Piña” with the support of Medicos del Mundo Argentina as the partner entity which organized the project’s  first public Forum of Collective Health  in the municipality of Comendador, located at the border of Dominican Republic and Haiti.  The main objective of the event was to build public opinion through a first exchange of ideas with sector stakeholders of civic society and local government regarding the growing problem of health and various types of violence against local and migrant women.

The project is slated to continue through implementing an integral campaign which includes using the local women network to distribute educational material to local recipient population regarding types of violence, detection and preventive measures. Another important deliverable is the generation of an information system to assess the current local situation.