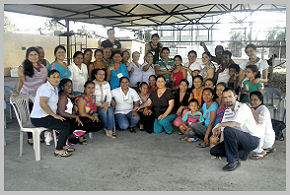 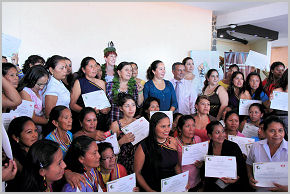 Women of the provinces of Napo and Orellana at their graduation ceremony in Tena, Napo. 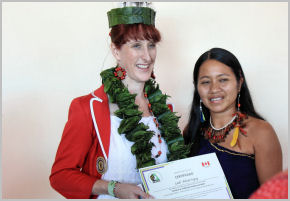 Ambassador O’Donnell handing over a certificate to a student from the Province of Napo .

With their needs often forgotten by the men of their communities, 100 Ecuadorian women recently had the opportunity to assert their value as human beings and as agents of positive social change. These women received leadership training through the Association of Rural Women of Ecuador, with support from the Canada Fund for Local Initiatives.

The training, which took place a couple of months before the recent municipal and provincial elections, gave them the necessary knowledge to participate more actively in their communities’ political life.

Fourteen women from the two provinces involved (Napo and Orellana) ran for municipal councillor positions for different political parties, and two of them were elected in the province of Napo. These women will directly be involved in their communities’ politics and will contribute to the improvement of living conditions for their fellow women and their families.

Canada’s Ambassador to the Republic of Ecuador Pamela O’Donnell attended the graduation following the training, and spoke about the significance of women’s participation in politics and in shaping the destinies of their communities.

“Sometimes we women think our voice is not important because we are not the CEO of a big company or a government authority, but it is important for the proper functioning of a democracy that each point of view be considered in decision-making, and even the work at home or in a small convenience store gives you a different perspective worth considering.” – Ambassador Pamela O’Donnell

Canada has been supportive of women’s organizations in Ecuador since the late 1990s, and as opportunities arise to help women fulfill their roles in society and further participate in the democratic life of their country, Canada will be there to support them.

“For Canada, it is of great importance to support issues such as human rights, citizen participation in political processes and gender equality, which all correspond to the fundamental values of all Canadians, and we believe, of all human beings.” – Ambassador Pamela O’Donnell

One woman who participated in the leadership training was forced into a marriage at eight years old. Breaking into tears when sharing her story, she spoke about the importance of education for women in remote areas and expressed gratitude for the training that gave her new tools to participate and contribute to society.

The Ecuadorian Parliamentarian for the province of Napo, César Solorzano, also attended the graduation and showed his commitment to rural women’s empowerment in his province by promising to invite some of the women trained to participate in national roundtables discussing new law proposals that will tackle issues of importance to them.

Rural communities in Ecuador often lack basic services and opportunities for all, and even if it is in the government’s plan to provide equal conditions for all Ecuadorians, there is still much to be done in some areas. This is where support from Canada and others is much needed and appreciated. The Embassy of Canada in Ecuador will continue working alongside the Ecuadorian government’s efforts to address the needs of the most vulnerable.