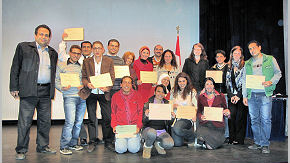 The group of journalists during the workshop in Cairo.

Canada is committed to supporting objective and ethical reporting in the Middle East, particularly in countries like Egypt where, for so many years, the Egyptian government has violated the freedom of press by prohibiting criticism of the government.

The Egyptian government’s prohibition is the reason why Egyptian reporters continue to struggle with the differences between objective journalism and advocacy.

Participating journalists delved deep into topics like analysis methods, such as causal analysis, which is a method to define the immediate cause and the root of human rights issues, and role analysis, which is a method to examine who plays what role under human rights issues. These two analysis methods help journalists to easily define problems and communicate them to the public. 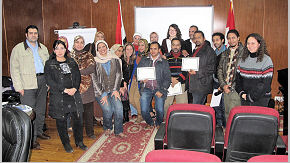 The group of journalists during the workshop in Alexandria. 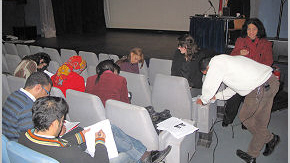 Working through the issues in Cairo

In addition, journalists in the sessions engaged in a spirited debate on topics like ethics and human rights issues. A module on integrating elements of citizen journalism and social media into professional journalism led to interesting discussions, touching upon issues of accuracy, integrity, data gathering, and journalism’s role in reporting human rights violations and promoting social change.

As a result of the training, participating journalists developed a knowledge toolbox to approach, deconstruct, and present stories. Egyptian journalists like Gamal Abdel Samad enjoyed the practicality of JHR’s framework, and were excited to apply them in their own reporting.

"This training was very useful for me and I hope the journalists in Alexandria can receive more similar trainings as it's rare to get such opportunities in our country."
Mr. Gamal Abdel Samad

"The Canadian Embassy is proud to support Egyptian journalists' efforts to report human rights and other issues in an accurate and informative manner, especially at this important time in Egypt's historic democratic transition."
Ambassador of Canada to Egypt, David Drake.