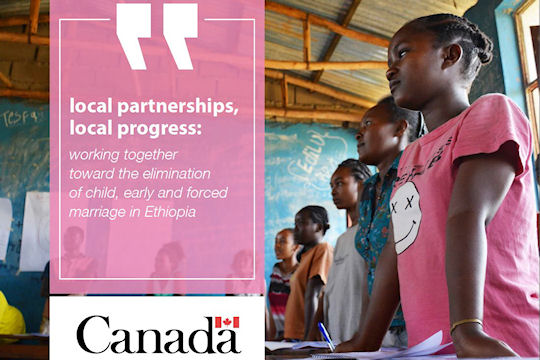 Exhibiting CFLI project beneficiaries, partners, local organizations, community members and government officials who are working together to mitigate the effects of CEFM. 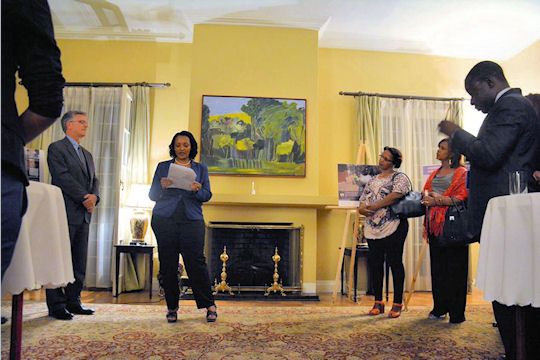 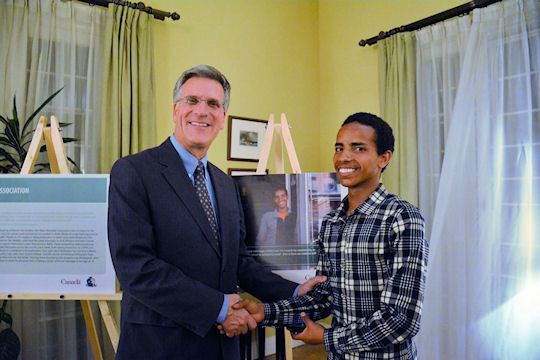 Canada’s Ambassador Baker with Wodjane, 17-year-old survivor of child marriage who is profiled in the exhibit.

Mekdes was married off three times from the time she was 11 years old.  After each marriage she tried to flee but was always caught and forced to return home.

The fourth time her parents tried to marry her off, she succeeded in fleeing. Mekdes escaped to Addis Ababa, Ethiopia’s commercial and cultural hub. It was there, as a domestic worker, that she was able to save enough money allowing her to return to her hometown and start a small business.

Sadly, the business was not profitable. Medkes returned to Addis Ababa to look for a new job to earn money. She met a young woman in the sex trade who told her that if she worked in this sector that she would earn enough money to “have a good life.”

Mekdes was a commercial sex worker until she came in contact with the Nikat Charitable Association, a government of Canada partner organization that aims to improve the living condition of low income women and female sex workers in Ethiopia. Mekdes is currently a member of Nikat and is receiving skills training in sewing and embroidery. Mekdes is looking forward to leaving the commercial sex industry and becoming a designer when she completes her training.

Young girl’s story inspires another child victim to speak up

Mekdes has been sharing her story of fleeing early marriage with an audience of 2,000,000 Ethiopians each week through Betegna (102.1 SHEGER FM), a Canada Fund-supported radio program which broadcasts every Wednesday at 7:30pm across Ethiopia.

Her weekly testimonials of the struggles she has faced coming to Addis have inspired many, including 17-year-old Wodjane who called into the radio station to share his own story of fleeing forced marriage in rural Ethiopia.

To protect children like Mekdes and Wodjane from child, early and forced marriage (CEFM), the Embassy of Canada to Ethiopia has supported eight CEFM-related Canada Fund for Local Initiatives (CFLI) projects in 2015-2016 and has developed an exhibit, “Local partners, local Progress: Working together toward the elimination of child marriage,” to showcase these projects.

In pursuit of eradicating CEFM, Canada continues to work with Ethiopian partners and with international organizations to ensure that girls and boys affected by CEFM are protected.