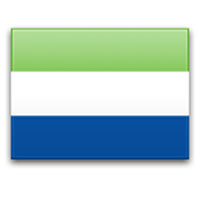 Canada and Sierra Leone are connected by a unique historical link. Freetown, the capital of present-day Sierra Leone, was founded in 1792 by a contingent of over one thousand settlers, including some from Halifax and other areas of Nova Scotia. These were mostly former slaves from the United States who had sought freedom in the remaining British territories in North America following the American war of independence. Even today, one can see the influence of the Canadian Maritime provinces in Freetown in the style of construction and the names of streets and businesses. This affinity is reflected today in the good working relationship, which allows Canada and Sierra Leone to cooperate on a broad spectrum of issues in various forums, including the United Nations Peacebuilding Commission.

Canada is represented in Sierra Leone by the High Commission of Canada in Accra.

Sierra Leone has been represented in Canada since 1973 by the Embassy of Sierra Leone in Washington, D.C.

Relations between Canada and Sierra Leone are based on more than fifty years of cooperation on the global scene, in particular in the United Nations and the Commonwealth.

In 2012, Canada concluded negotiations with Sierra Leone for a code-share only Air Transport Agreement, allowing for Canadian carriers to offer code-share services into Sierra Leone.

In 2017-2018, Canadian official development assistance to Sierra Leone was estimated at $14.77 million and was provided primarily through multilateral channels.

In response to the August 2017 mudslides in Sierra Leone, Canada supported emergency relief operations and provided emergency response to those affected through the Canadian Red Cross Society and CARE Canada ($236 250). Canada has provided $1 million through the UN Development Program and the UN Peacebuilding Fund to support Sierra Leone’s March 2018 elections, and was an active observer during those elections. The elections were judged free and fair by the National Electoral Commission and by international observers including the African Union, the Economic Community of West African States, the EU and the Commonwealth.

Through the Canada Fund for Local Initiatives program, Canada annually supports small-scale, local projects in Sierra Leone. These have recently included addressing sexual and gender-based violence, with a focus on preventing female genital mutilation/cutting, promoting the political participation of women and youth and promoting responsible political reporting by media.

During Sierra Leone’s civil war, from 1991 to 2002, Canada was one of the world’s leading humanitarian donors and has continued its support through the UN Peacebuilding Commission and the Residual Special Court for Sierra Leone. More recently, Canada was one of the earliest responders to the Ebola crisis and committed more than $130 million to help address the health, humanitarian and security implications of the crisis in Sierra Leone, as well as Guinea and Liberia.

As part of its commitment to the Global Partnership against the Spread of Weapons and Materials of Mass Destruction, Canada is supporting Sierra Leone to build its capacity to mitigate ongoing threats posed by Ebola and other high consequence pathogens. This support includes the provision of a new “BioBank” and laboratory for storage and work on Ebola samples from the 2014-15 outbreak ($8.5M committed to date). Ebola experts from Public Health Agency of Canada and Public Health England are supporting the training component ($4.81M) of this project.

Since February 2009, Canada has chaired the Sierra Leone Configuration of the UN Peacebuilding Commission through Canada’s permanent mission to the UN in New York. The UN Peacebuilding Commission is an inter-governmental advisory body that supports post-conflict states in their peacebuilding, recovery, reconstruction and development efforts. As an indication of the progress achieved, Sierra Leone has progressed from a recipient country of peacekeepers to one that now contributes armed forces personnel to peace operations such as:

Canada was highly involved with the Special Court for Sierra Leone (SCSL), contributing $18 million and chairing its Management Committee until the SCSL concluded its work on December 31, 2013. The Residual Special Court for Sierra Leone (RSCSL) was created in January 1, 2014, to carry on the remaining functions of the SCSL, including archiving, witness protection and dealing with any judicial work stemming from the SCSL’s mandate. Canada continues to make valuable contributions to the RSCSL; for example, Canada chairs the RSCSL Oversight Committee and maintains a Canadian roster judge, who can be called upon if needed.