Canada is helping to raise awareness of the causes and effects of Early Forced Marriage (EFM) in Ghana.

The High Commission of Canada in Ghana supported a media forum that broadcasted a conversation on the radio airways in an attempt to educate the public about EFMs, their negative impacts on women and children. 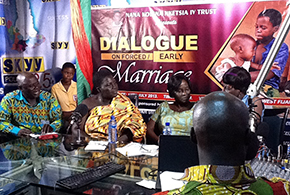 In Ghana, the Criminal Offences Act, 1960 (Act 29) makes it illegal to force a person by duress to get married to another person against that person’s consent. The Children’s Act of Ghana, 1998 (Act 560) also prohibits forced marriages of children. Despite these laws, there has been little action to eliminate the practice. Since 2003, the decline rate has been a mere 1% — an indication of its entrenchment as a practice.

Many Ghanaians are unaware of the extent of the practice of EFM in the country. The forum enlightened listeners on how deeply entrenched the practice is in the Ghanaian society, especially in the Western Region.

A joint United Nations-Ghana Press release indicates that 25% of girls will be married before their 18th birthday. Furthermore the Multiple Indicator Cluster Survey recorded that about 27% of women aged 20-24 were married before age 18.

Panellists at the forum took time to discuss existing laws that criminalize EFM and the various state and non-state institutions available to assist victims of EFM, and girls who may fall prey to this practice.

One young woman who called-in during the live radio programme shared:

“My parents gave me out for marriage to a 47 year old man at age 13. It was seven years of hell and bondage and I would not wish for any girl to go through such an ordeal. I have been prevented from seeing my children for two years now, but thanks to your program, I now know where to turn to for assistance.”

Some of those resources include the Commission for Human Rights and Administrative Justice, the Domestic Violence Unit of the Ghana Police Service, the International Federation of Women Lawyers, Ghana (FIDA-Ghana) and Women in law and Development (WILDAF).

The event, which took place in the studios of SKYY Media House, brought together a representative each from the Commission on Human Rights and Administrative Justice, Council of Traditional Leaders, Western Region Education Board, the religious community and a representative from the High Commission of Canada.

The Nana Kobina Nkestia IV Trust, organisers of the media forum in collaboration with Skyy Media – a radio and television network in the Western region, hopes to air excerpts from the discussions at the forum periodically on the Skyy media network and produce a short film on EFM to promote the advocacy against EFM especially in the Western Region.

The forum has since sparked discussions on most of the community radio stations on how the practice of EFM can be checked.

“I see this initiative as tremendously important, as it shed light on the extent of Early Forced Marriage in Ghana and the effects it has on the development of young women and girls.  This is an issue that directly involves parents, religious and traditional leaders.  It will take a concerted effort at many levels to overcome this practice and protect the rights of women and girls.  A real step forward!”
Trudy Kernighan, Canadian High Commissioner