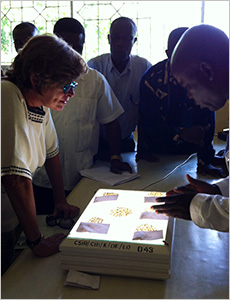 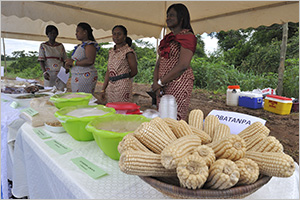 Quality Protein Maize (QPM) and QPM based products on display. 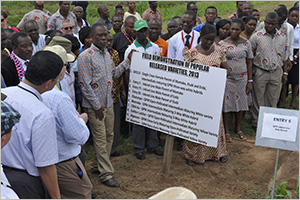 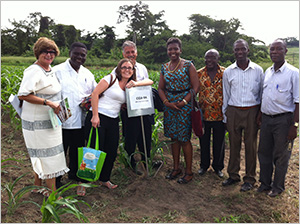 Crops Research Institute Director, Canadian High Commissioner to Ghana and staff of both organizations pose for a picture in front of a QPM Variety, CIDA-BA, named after CIDA.

Canada and Ghana have maintained a strong partnership in agricultural research through collaboration between Canadian and Ghanaian universities, capacity development of national research institutions and other Canadian funded development projects.

Canada’s support has helped Ghana develop an agricultural research system that is improving food security and economic growth throughout the country.

The impact of Canada’s support to the Ghana Grains Development Project (GGDP) is still felt today. The GGDP, funded through the Canadian International Development Agency (CIDA) ran from 1979-1997 and was an agricultural research and extension project with a focus on institutional capacity building and gender equality.

The project was highlighted in the 2008 World Bank’s World Development Report as “one of the few African success stories of long-term donor support to strengthen national research and extension for food production“.

Canada’s support to the GGDP contributed to several new improved varieties of maize, which are now still widely used by farmers, including Quality Protein Maize (QPM) varieties that have a higher nutritional value than traditional maize varieties.

QPM varieties are now being used by over 15 countries around the world.  As a result of this project, Ghanaian farmers have significantly increased their yields and their incomes.  As an indication of the close relationship between Canada and Ghana, researchers nicknamed one of the new QPM varieties, CIDA-Ba (CIDA Baby).

Canada continues to support Ghana’s agricultural system, building on lessons learned from the GGDP.   Canada is providing direct budgetary support to the Ministry of Food and Agriculture, which includes support the Research-Extension Linkages Committees — a concept that developed from GGDP.

On a recent tour with the Crops Research Institute — the implementing body of the GGDP — Mrs. Trudy Kernighan, High Commissioner of Canada, noted “Canada is proud of the role we have played in supporting agricultural research in Ghana. Maize varieties developed with Canadian support are now widely used by farmers.”