A totem pole restoration brings Canada and Greece closer together

In celebration of the 70th anniversary of Canada-Greece relations, the Canadian Embassy and the Benaki Museum restored an original full-scale totem pole. 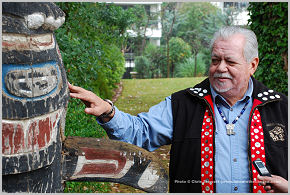 The pole comes from Canada's Pacific Northwest Coast, which was located for many years at the Canadian Official Residence. Now, fully restored, the totem pole is on display at the Benaki Museum where it will remain until late in 2013.

The Totem Pole is an original work of art created in the early 1960's by Chief Tony Hunt. Known as the Chief's Crest Pole, the pole has four sections, each section representing a "chapter" of its history. At the top is the tribal chief wearing a conical hat; below is the raven; then a frog in the raven's beak; and, at the base, a whale with a fin.

Having suffered extensive erosion mostly from exposure to the elements, the Embassy started an extensive restoration process to rescue this important symbol of World Cultural Heritage.

A learning experience for Museum visitors 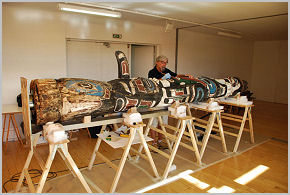 Canadian conservator Andrew Todd restored the Totem Pole in the Benaki Museum. During that time, the space was open to the public so that visitors could witness the restoration first hand.

Mr. Todd took the time to speak with visitors in the form of a ‘live workshop’, providing a wonderful opportunity for visitors to learn about Canadian First Nation culture, totem poles and the restoration process.

Mr. Todd also gave a lecture on the process and spent some time engaging with children who were visiting the museum as part of a field trip. 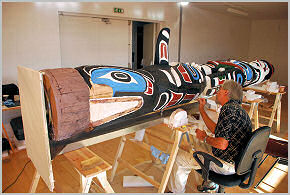 Totem poles are monuments of the Pacific Northwest First Nations communities representing and honouring ancestors, human stories, people or events. They present human beings or animals, that symbolize a family's ancestry, and they confirm the rights and privileges they possessed.

Totem poles do not necessarily narrate a story. They serve as evidence of the legends and history of First Nations families, tribes, clans or communities. Totem poles were used primarily as markers and communication tools rather than religious symbols.

From the early examples until today, totem poles play an important socio-cultural role in many First Nations communities. For this reason they are raised during special ceremonies, often accompanied by elaborate celebrations.

Chief Tony Hunt reunited with one of his first carvings 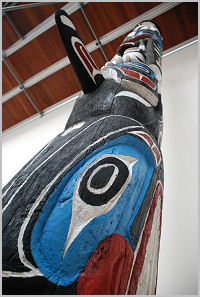 The totem pole restored, and on display. Photo: Chris Stewart.

Chief Tony Hunt is hereditary chief of the KwaGulth people and is one of the greatest living Canadian native artists of the Pacific Northwest. Chief Hunt has designed nearly 100 full-scale totem poles – more than any other First Nation artist. The totem pole in Athens is his third carving of his long career. Many of his works are celebrated monuments in countries around the world.

The work was performed in collaboration with the Benaki Museum and with support from the Centre for Hellenic Studies at Simon Fraser University, the Hellenic community in Vancouver and the Visual Arts Collection Program at Foreign Affairs and International Trade Canada. The Embassy would also like to acknowledge the support of Simon Fraser University, specifically the Faculty of Arts and Social Sciences, the Faculty of Environment and the Stavros Niarchos Centre for Hellenic Studies.

The Canadian Embassy to Greece worked with Chris Stewart to capture the entire restoration process in photos and video, which can be viewed on his blog.