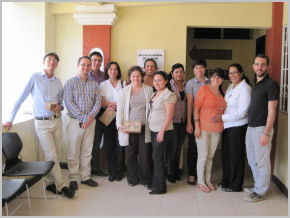 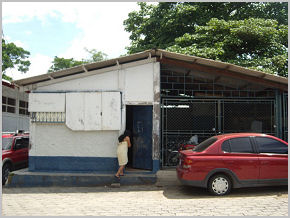 The old facilities for victims in Chiquimula. 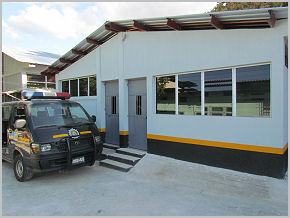 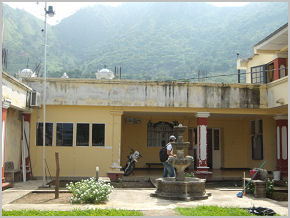 The old facilities in San Jacinto. 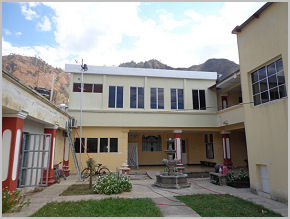 The new facilities in San Jacinto, with an entirely new second level. 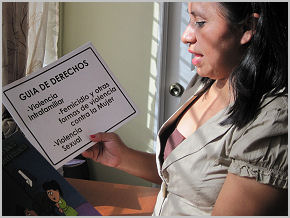 A staff member of the Office for the Protection of Women talking to women about their rights and the institutions that can help them in cases of violence.

Every morning, Mayra Liseth Vanegas would awake wondering if she would live to see the next day. For five years she suffered in silence from repeated brutal attacks from her spouse. Mayra was trapped in what seemed an unbreakable circle of violence. One day, when her spouse’s wrath reached her young son, Mayra’s instincts lead her to denounce him before a judge, who issued a restraining order. Unfortunately, the system, which is historically dismissive of violence against women, failed her and her husband was back in her house after a short period of time. Physical and psychological violence against Mayra and her son grew in brutality and cruelty.

Guatemala is a very dangerous place for women. According to the Human Rights Ombudsman, Guatemala is the second most violent country in the world for women. In 2012, some 700 women were murdered, many of whom were also sexually assaulted, their bodies then mutilated and left in public view. Women are often targeted as a method of retaliation and intimidation between rival gangs and larger criminal organizations, but a vast majority are victims of domestic violence.

What is more tragic is that it is so common.

One day Mayra was invited by friends to participate in a workshop offered by the City Hall. The workshop, offered by the Municipal Committee for Women, is part of a $1.2 million project supported by Canada’s Global Peace and Security Fund to raise awareness about gender violence and improve access to justice.

Mayra recalls: “When I saw the video they showed I could see my life reflected on it. The fact that other women had gone through what I was going through and had managed to change their lives gave me the courage I needed to denounce my spouse before the authorities and take the necessary steps to make sure he stayed away from my son and me. After all, our lives were meaningful and I was not alone.”

A year has gone by since Mayra participated in that workshop. She now counsels other women in the same situation and has become a leader in her community working to empower women. [Video available only in Spanish.]

Canada is working with national and international partners to help more women break this deadly circle of silence. In partnership with the Centre for International Studies and Cooperation (CECI), Canada has contributed to increasing the efficiency and infrastructure of law enforcement and municipal offices in the cities of San Jacinto, Chiquimula and Esquipulas in Guatemala.

More than 15,000 women have participated in these Canada-funded workshops and other activities to raise awareness about their rights and inform them of the institutions that can provide assistance. By working with the Municipal Offices for Prevention of Violence against Women in these three cities, the project fostered the creation of women support networks.

Since the initial project, more communities in the area have approached the municipalities requesting similar support. So, the circle of silence could be breaking…from the bottom up, one municipality at the time.