On behalf of the Embassy of Canada to Iceland, I’m pleased to welcome you to our website.

Since arriving in Reykjavik just a little while ago in September 2016, I have been charmed by the magic of this vibrant city - and I have not even seen its northern lights yet!  I am preparing to explore its most famous and not so well-known sites and cities and meet with as many Icelanders as possible – who knows, maybe some of you I will meet on those paths – discover nature and culture, the soul of the land, and see for myself if I can find the traces of the characters in the sagas, and in the famous epic of Halldór Laxness Sjálfstætt fólk (Independent People) which was rightfully graced with the Nobel prize of literature in 1955.

Some thousand years ago, Leifur Eiríksson's famous transatlantic voyage towards Canada and the establishment of a Viking outpost at L'Anse aux Meadows, Newfoundland and Labrador marked the first known encounters between the Norse and Canada’s First Nations. Our ties have strengthened with the strong cultural heritage brought by the many Icelanders who settled in Canada during the last quarter of the 19th Century, and who still proudly remain "Western Icelanders".

This relationship has also grown through our cooperation in various fora, such as the Arctic Council, NATO and the United Nations. Implementation of the Free Trade Agreement between Canada and the nations of the European Free Trade Association – including Iceland – offers a strategic advantage to trade in all our countries. Cultural and youth exchanges celebrate our shared heritage and build even stronger ties for the future. Perhaps, our two countries have never been closer as they are now, since we share a citizen, Forsetafrú Eliza Reid, who has become the First Lady of Iceland!

As we approach the 150th Anniversary of Canada’s Confederation in 2017, which we will celebrate with all of you present here in Reykjavik next year, there could not be a better time to be representing Canada in Iceland, and I am honored to have been made captain of our course.

Our modest ̶ but mighty ̶ crew, also includes Sæmundur Finnbogason (Sæmi), Trade Commissioner and Public Affairs Program Officer, Edda Sigurdardottir, Consular and Administrative Officer and Sigurdur Guttormsson (Siggi), Consular and Common Services Assistant. Together, we stand ready to assist you and are committed to working with you in making your pursuits in Iceland a success which will further strengthen the extraordinarily friendly, cooperative and productive relationship between our two peoples and our two countries.

Feel free to sign our virtual book of visitors. We are looking forward to hearing from you about a visit you might be planning or recently had to Iceland, whether for business, tourism, scientific research or academic studies. We are equally interested in your ideas with respect to the relationship between our countries and the promotion of Canadian interests in Iceland.

You are also invited to follow us on social media CanadaIceland and CanadaIceland, where you will be kept updated about our activities and important developments in our bilateral relationship.

So, until our path cross, as we say here, 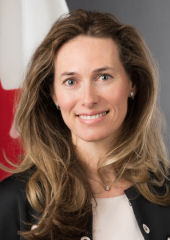