Deborah Lyons joined the Department of Global Affairs Canada in 1999 and was immediately posted to Tokyo as Commercial Counsellor for Canada’s high-tech industries. After serving in Japan for 5 years, she returned to the departmental headquarters in Ottawa where she held a number of key positions; Director, International Finance; Director-General, North America Commercial Affairs; and Assistant Deputy Minister for Strategic Policy and Planning and Chief Strategist.  In 2010, Ms Lyons was appointed as Deputy Ambassador at the Embassy of Canada in Washington, D.C.  In 2013, Governor General David Johnston appointed Ms. Lyons as Ambassador Extraordinary and Plenipotentiary of Canada to the Islamic Republic of Afghanistan, initially for 1 year; however, given the importance of the work Ambassador Lyons served a total of 3 years. Then in 2016, Governor General Johnston appointed Ambassador Lyons as Ambassador Extraordinary and Plenipotentiary of Canada to Israel. Ambassador Lyons formally presented her credentials to President Rivlin on December 12, 2016.

Before joining the world of government, Ms. Lyons was a small business owner of a national energy consulting company and owned and managed an outdoor recreation centre.

Ambassador Lyons is a graduate of the University of New Brunswick (and a recent honorary degree recipient). In 1993 Ambassador Lyons took part in a year-long study program at Canada’s National Defence College.

Ambassador Lyons has a large and extended family and a wonderful daughter, Tessa, who works in California at Facebook. 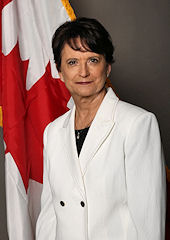