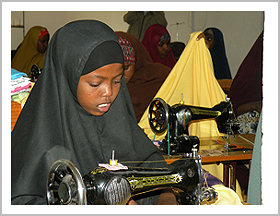 From sewing the sanitary kits, Deka makes enough to buy food, clothes and sustain other needs. 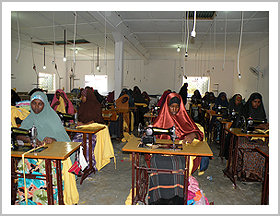 The girls graduated from the tailoring school have since been issued with sewing machines and contracted.

It’s been more than five years since 16 year old Deka Abdirasak Omar fled Mogadishu with her three brothers, four sisters and mother. Escaping the intense fighting, the family sought refuge in the Bulo Ba’ley settlement in Galkayo, the capital of the north-central Mudug region of Somalia.

“I arrived in Galkayo five years ago because of the fighting and how expensive life was,” Deka explains. “My uncle was killed and my brother shot in the stomach. We could not find my father. Seven days after my brother went to the hospital, my relatives gave us some money to leave Mogadishu by car.”

A couple of years after moving to Galkayo, Deka’s mother passed away, leaving the children to be their own breadwinners.

“My sister and I are the only ones who go to school while the rest of my sisters clean houses and collect garbage to earn a living. My brothers also wash cars. Sometimes we manage and eat cereals and bread. But sometimes we don’t,” she adds.

Funded by the High Commission of Canada in Nairobi, the Galkayo Education Center for Peace and Development started a vocational skills training project to directly benefit 60 displaced girls and equip them with skills that would enable them generate income and sustain their needs. These girls, Deka being one of them, have been trained in sanitary kits production which they eventually sell to earn a living.

“Now that I work, our lives have changed so much. We can now buy food, clothes and pay our monthly rent of two US dollars,” Deka beams.

From sewing the sanitary kits, Deka makes up to 40 US dollars, enough to buy food, clothes and sustain other needs.

The girls graduated from the tailoring school in 2009 and have since been issued with sewing machines and contracted to do the sewing of the kits. These kits are also distributed to other women and girls, with 20,000 women having received the kits.

Protection staff in Galkayo testifies of the difference the project has had on the lives of these girls. “Many of these girls who were initially desperate are now foreseeing a brighter future, as they are able to run their own business or tailoring shops and can earn enough money to support their families,” protection staffer Jaffer Aminullah says. “Otherwise the odd jobs of collecting garbage or washing clothes used to force them to substitute their income through undignified ways as prostitution or theft.”

Apart from the project providing an income generating activity, the girls also get formal education as they go to school after their sewing session in the morning. They are taught Math and Small Business trading, which teach them more on how they could manage their own businesses in future.

Deka says she does her sewing during the morning, after which she then proceeds to school. She says she would like to continue working and learning even during the holidays. As she dreams of one day returning to her home in Mogadishu, Deka would be happy to start her own sewing business, thanks to the skills she has learnt.

“I can now read and write. I will use the sewing that I have learnt throughout my life, as it will help me earn an income to sustain my family,” she concludes.

42 boys have also been enrolled in vocational skills training programs in carpentry and welding, after which they will be provided with start-up kits to enable them start their own small businesses.