Welcome to the May 2013 inaugural issue of Connect to Canada.

A periodic newsletter from the High Commission of Canada in Malaysia
providing economic, business, political and cultural news on Canada’s activities in Malaysia
and noteworthy items from Canada. 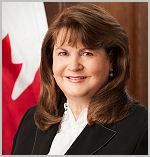 On March 15, Canada’s Minister of Foreign Affairs John Baird announced Ms. Judith St. George as Canada’s new High Commissioner to Malaysia. Ms. St. George arrived in Malaysia on April 26. She is a graduate of Queen’s University and Carleton University and joined the Department of External Affairs in 1986. She has served in the United States, the Philippines, as Consul General in Ho Chi Minh City and as Commercial Economic Counselor and senior trade commissioner in London. This will be her second tour in Malaysia; having served as first secretary at the High Commission from 1989-1993. Ms. St. George is looking forward to building on the recent momentum in Canada's relationship with Malaysia created by PETRONAS' massive investments in British Columbia, the increasing profile of Canadian companies in Malaysia, and the collaborative approach of our two countries on security cooperation. Join us in welcoming Ms. St. George back to Malaysia. 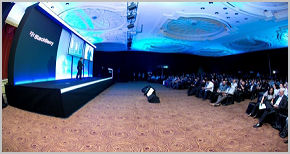 Canada’s own Research In Motion Ltd, now known as BlackBerry, introduced its BB10 platform and BlackBerry Z10 smartphone model in Malaysia on February 20 to rave reviews by online and print media. BlackBerry held a well-attended consumer launch of their BlackBerry Z10 model on March 8, with top application developers, businessmen, government officers and journalists eager to get a look. The BlackBerry Z10 smartphone is now available via Maxis Communications, Celcom and Digi. BlackBerry initiated activities with carriers, as well as mobile application developers and academic institutions to further promote the BB10 and enhance their presence in Malaysia.

Since the global launch of the BlackBerry 10 models on January 30, BlackBerry shipped about six million smartphones in the first quarter of 2013, including one million of the BB Z10 smartphones. More than 76 million people trust the Canadian blackberry for their mobile communications.

Petronas' takeover gives it control over Progress Energy's 1.9 trillion cubic feet of estimated gas reserves in British Columbia. As part of their arrangement, Petronas and Progress are developing an LNG terminal off Canada's Pacific Coast, aimed at exporting natural gas to Asian markets.

"This project is a win-win for Canada and Malaysia, as Canada seeks to expand its customer base into Asian markets - one of Petronas' strengths, coupled with Canada's massive reserves and safe and predictable business climate" says Canadian High Commissioner Designate Judith St. George. The Petronas investment will create hundreds of jobs in both the construction and operational phases over the coming years.

The Canadian Navy comes to town 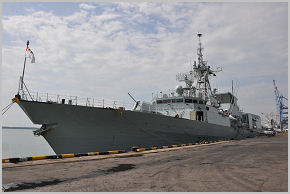 HMCS Regina, one of the Canadian Navy’s frigates, visited Port Klang, February 5 - 7. The Regina’s action- packed visit included a welcome reception and a dinner for Canadian companies and friends, both co-hosted-by Commander of Canada’s Pacific Fleet, Commodore Scott Bishop.  Commodore Bishop also hosted a high-powered luncheon with the Director General of the Malaysian Maritime Enforcement Agency, Admiral Datuk Amdan bin Kurish, to discuss Canada-Malaysia cooperation in fighting illegal migrant smuggling.  There was also a courtesy call on the Deputy Chief of the Navy, Vice Admiral Datuk Mohammed Noordin bin Ali, and tours of the ship for the Malaysian Navy, Malaysian government officials and the Canadian community. Last, but not least, crew members teamed up with the High Commission to make repairs and play with the kids at Rainbow House, a local children’s home in Cheras, a suburb of Kuala Lumpur. 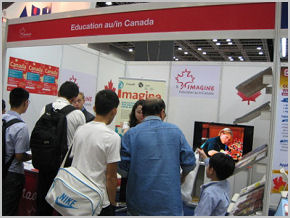 The High Commission of Canada in Malaysia held the fourth annual Study in Canada Fair in Kuala Lumpur, February 2 and 3, and in Penang on Feb 4.  International recruiters from 23 Canadian colleges and universities participated in the fair, a record.  Mission trade staff organized visits to ten schools over the three days prior to the Fair, enabling the recruiters to reach a wider audience.

Successful networking receptions were organized in both cities, with the notable attendance of Penang Chief Minister Lim Guan Eng at the Penang event. Combined attendance between the two fairs was more than 1300 people. For more information on studying in Canada. 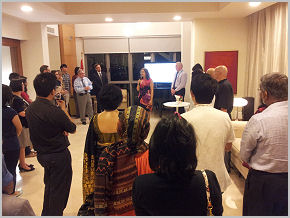 On April 4, the Dean of Engineering from the University of Toronto, Dr. Cristina Amon, visited Kuala Lumpur to promote the strong technical education available at one of Canada's leading universities.

The aircraft, scheduled for delivery between 2013 and 2014, will be utilized for regional commuter operations based in Kota Kinabalu. They will be added to MASwings’ existing fleet of legacy Twin Otter aircraft, which have a 25-year proven track record for reliability, durability and suitability with MASwings’ theatre of operations in the interior of Sabah and Sarawak.  Another Twin Otter was on display at the Langkawi International Maritime Exposition in March.

With the Twin Otter Series 400 in operation in 14 countries and a backlog exceeding MYR1.23 trillion, the Series 400 is the best-selling next generation 19-passenger aircraft available today.