Canadian Advocacy in action – Supporting human rights, democracy and the rule of law
The periodic e-newsletter of the High Commission of Canada in Malaysia

Canada and Malaysia have a long history of close and friendly relations, reinforced by growing political, economic, security and social cooperation. In addition to the official relationship, Canada recognises the need and value of working with non-governmental organisations such as civil society, media and academia.

Since 1990, Canada has supported the efforts of civil society groups in many countries around the world to increase their skills through funding from the Canada Fund for Local Initiatives (CFLI) and other small project funds.

The Canada Fund for Local Initiatives 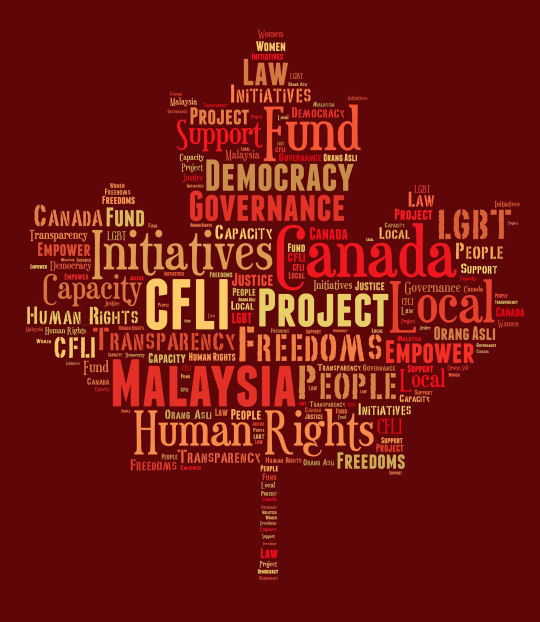 One of Canada’s best known funds, the CFLI allows Canada’s embassies and high commissions around the world to support projects aligned with Canada’s priorities and values, including:

CFLI has a long history in Malaysia. In the past two years, the High Commission of Canada has supported the following organisations through CFLI and other funds:

“I learned about the complicated journey a rape victim must go through, including the hospital exam and court case. The training was informative and useful.”

“This training will help me assist the victims and witnesses during the trial process, by translating more accurately for the judges, prosecutors, and lawyers.”

PT Foundation, established in 1987, is the most established community-based non-profit HIV/AIDS organisation in Malaysia, and plays a key role in advocating for the healthcare needs and rights of the marginalised communities such as men who have sex with men (MSM) and transgender women. 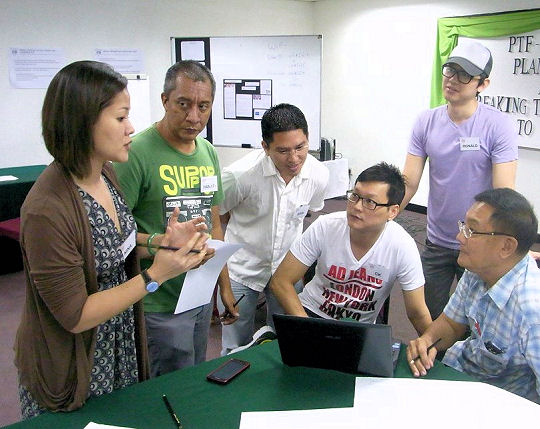 It has provided services to more than 100,000 Malaysians since its inception.

The Centre has been providing HIV testing and counselling to an average of 1,000 clients per year since 2007, referring clients for treatment, care and support, hence saving valuable lives and stopping the chain of infection.

Through Canada’s funding, the Centre successfully made a transition from a free service model to a self-sustaining social enterprise model, including capacity building of structures, systems and processes.

Sisters in Islam - Understanding Islam from a Rights Perspective

Sisters in Islam (SIS) is a women’s rights NGO that is recognised internationally as a pioneer for its ground-breaking work in building a rights-based understanding of Islam and for its success in creating a public space for Muslim women demanding equality and justice in Islam. In 2009, SIS launched Musawah (Global Movement for Equality and Justice in the Muslim Family) as a civil society movement with a global reach, working to promote equality and justice in families and society.

CFLI funding enabled the production of video training modules for use by Musawah resource persons in advancing an understanding of Islam from a rights perspective and for future capacity building initiatives.

Established in 1977, Aliran is the oldest human rights NGO in Malaysia and offers a progressive, political voice on social issues. 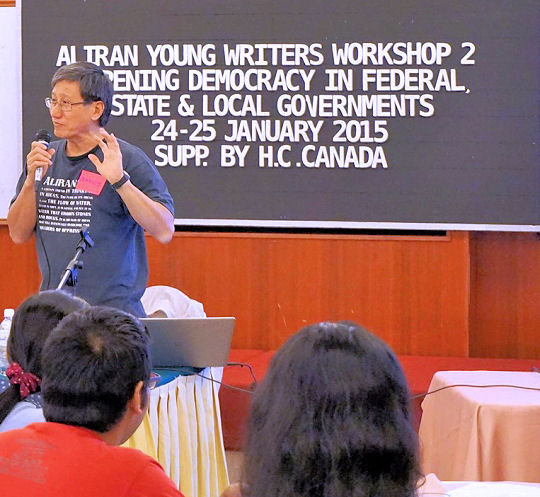 Recognizing the importance of youth voices in advancing democracy, CFLI supported Aliran in implementing four workshops for young writers in Penang, Kuala Lumpur, and Ipoh. The workshops focussed on the topics of democratic governance and youth participation, women and vulnerable groups, multiculturalism and diversity, and the decentralization of government. Aliran was able to train and mentor close to 80 young writers whose articles are featured on the organisation’s website: http://aliran.com/category/thinking-allowed-online/2015-young-writers/

“If we want to push the boundaries of democracy and uphold the principles of people’s power and equality, this is the right time to do it.”

An excerpt from "Like software, our government too need its update" by Shuhaib Ar Rumy Ismail, participant in the Aliran Young Writers Workshop

“Differences make us a multicultural society… but elevated and reinforced distinction only breeds chaos.”

An excerpt from "Multiculturalism: Back to Basics" by Shannon Wong, youth writer and participant in the Aliran Young Writers Workshop

Persatuan Kesedaran Komuniti Selangor, or EMPOWER, seeks to promote justice and democracy through enabling women and youth. With the help of CFLI funding, EMPOWER implemented a ground-breaking project to build the capacity of female leaders from the Orang Asli (indigenous) community aimed at increasing democratic participation for women and marginalised communities. 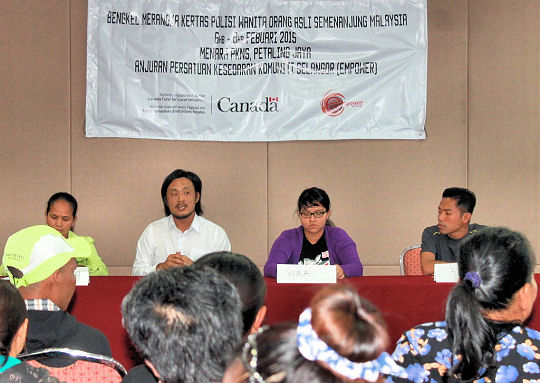 Despite damaging flooding in some of their villages earlier this year, almost 30 participants attended a workshop that provided hands-on presentation and advocacy training on issues affecting Orang Asli communities, such as land grabbing, access to higher education, corruption, and political representation.

The participants also held a press conference and organised a dialogue with government agencies and other stakeholders at which a policy paper was presented.

This dialogue set the groundwork for future consultations between the Orang Asli female leaders and government ministries, as the Ministry of Women, Family and Community Development offered a small grant towards the advocacy work, and committed to examining laws and policies that specifically disempower women of the community.

Justice for Sisters (JFS) is a grassroots campaign working to increase awareness of issues facing the Mak Nyah or the transgender community in Malaysia. 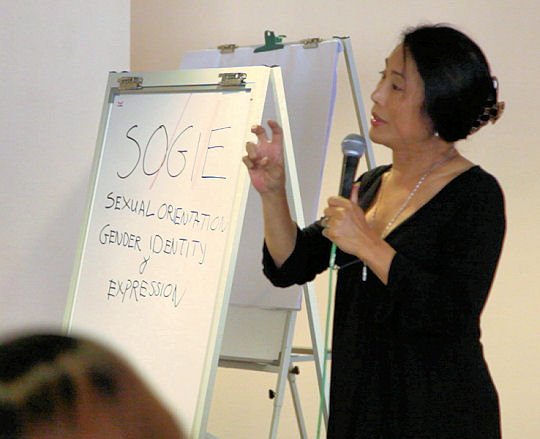 Recently highlighted by Human Rights Watch as one of the worst countries to be a transgender individual, Malaysia is facing intensified scrutiny for systematic abuse against members of the community.

Canada believes a person’s sexuality must never be the basis for criminal penalties, violence or discrimination. With the support of CFLI, JFS held three empowerment workshops for transgendered people from the regions of Sabah, Sarawak, and Penang.

Video documentation of individual stories can be found at: https://youtu.be/ofLJ-7LkBqI

Founded in 1998, Transparency International - Malaysia (TI-M) is an independent NGO dedicated to fighting corruption and the promotion of transparency, accountability and integrity. 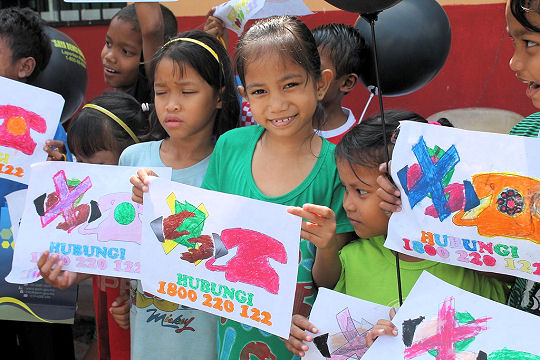 With the support of CFLI funds, TI-M established a toll-free hotline for anonymous reporting of corruption, and visited three Orang Asli villages to educate and empower indigenous communities on reporting corruption.

Issues of corruption around land use and ownership have plagued indigenous communities, leaving a sense of fear and cynicism around reporting.

The project, known as Speak Up Against Corruption, expanded upon an existing working partnership between TI-M and the Malaysian Anti-Corruption Commission (MACC).

From the hotline, TI-M will compile statistics and produce reports necessary to track and support the ongoing efforts towards combatting corruption throughout Malaysia.

“First time a workshop on corruption is held for us.”

Since 1985, the Women’s Centre for Change (WCC) in Penang has been a leading women’s rights organisation that offers community outreach programs, provides free services in counselling, emotional support, legal advice, and temporary shelter for women and children in crisis situations. 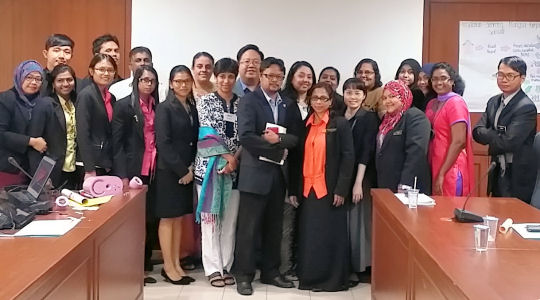 As one of three CFLI projects funded this year with a focus on human rights for women, WCC organized trainings to increase capacity for advocacy and support of domestic violence and sexual assault victims.

The first training for 25 staff and volunteers incorporated field visits to both a local hospital and a working courtroom, to provide participants with a more practical understanding of a victim’s reporting process. The second training for court officers provided a first-of-its-kind sensitization workshop for 18 court employees, in order to improve court empathy and responsiveness for victims throughout the legal proceedings. 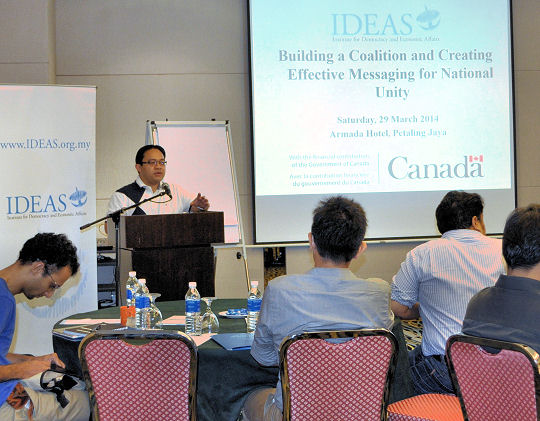 As one of only five NGOs by the government invited to monitor Malaysia’s 13th General Election in 2013, the Institute for Democracy and Economic Affairs (IDEAS) received support from Canada to conduct a series of election observer training sessions to equip state coordinators with the skills required for leading short term electoral observation missions.

With Canada’s support, SUARAM Penang collaborated with Penang Freedom to Love and Rainbow Connection to mount a conference for organisations in northern Malaysia working on sexual orientation and gender identity and expression (SOGIE). The project also established a website, http://plusos.org/home to provide safe and and non-judgemental online support and awareness for the Malaysian LGBTIQ+ (lesbian, gay, bisexual, transgender, intersex and questioning) community and its allies. 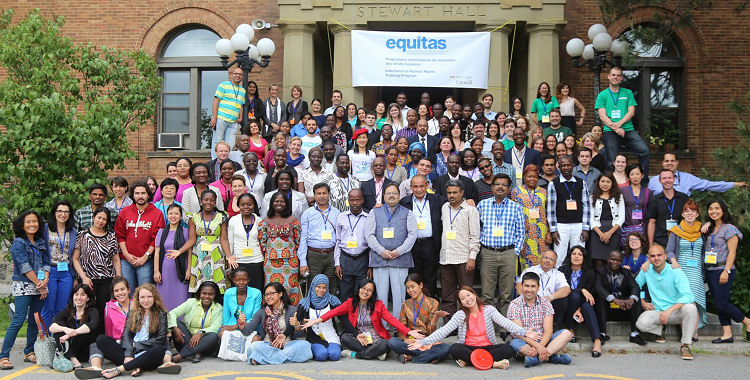 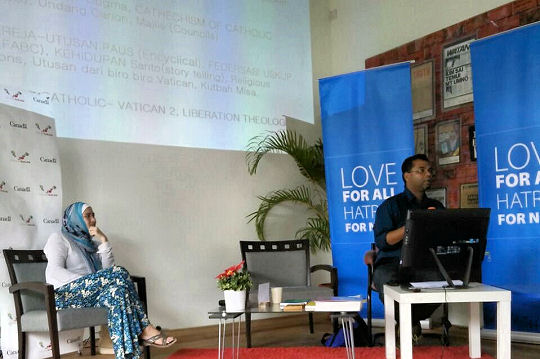 Projek Dialog is a dynamic social discourse project that aims to promote debate and understanding within and among the diverse cultural, ethnic and religious groups in Malaysia.