From June 7 – July 5, Canada hosted the largest women’s single-sports event in history, the FIFA Women’s World Cup.  Over 552 women from 24 countries took to the pitch to show their skills, vying for the world’s most prestigious soccer (football) trophy.  Several of the matches  attracted more than 50,000 fans, and overall attendance halfway through the tournament had already broken the previous record of 1.2 million set in 1999 in the U.S.  Congratulations to the United States Team who were crowned champions of FIFA Women’s World Cup 2015 on July 6.

Canada couldn’t be more proud to play host, as a world leader in the promotion and protection of women’s rights, and in the advancement of gender equality and the empowerment of women and girls. Canada is committed to the view that gender equality is not only a human rights issue, but is also an essential component of sustainable development, social justice, peace, and security.

As a demonstration of this commitment, Canada’s foreign policy priorities include the elimination of violence against women, ending child, early and forced marriage and improving maternal, newborn and child health.  In Malaysia, the High Commission has recently supported local organisations that are supporting victims of sexual violence to access justice, empowering female leaders from the Orang Asli (indigenous) community, helping increase awareness of women’s rights in Islam, and empowering and protecting the human rights of the transgender women community.

On June 16, High Commissioner Judith St. George witnessed the handover of a VERIFIER Travel Documents and Biometrics system from the International Organisation for Migration (IOM) to the Malaysian Immigration Department at Kuala Lumpur International Airport Terminal 2. Developed by the IOM with funding from Canada, VERIFIER assists immigration and border control officers in detecting fraudulent travel documents and imposters, all in less than 20 seconds.  The first verifier in Malaysia was deployed on August 2014 at the Kuala Lumpur International Airport. Since 2014, the IOM has deployed VERIFIER with Canadian support to nine countries in Asia, resulting in hundreds of fraud cases being identified. 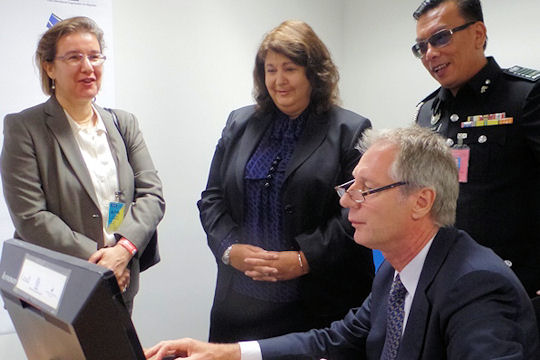 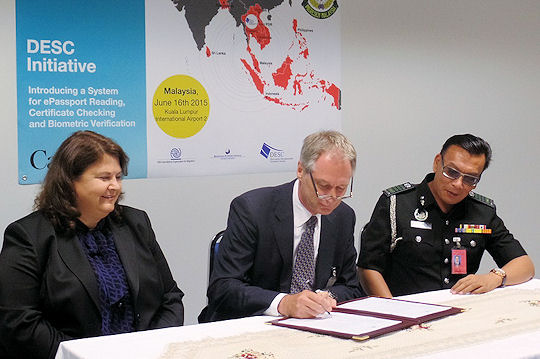 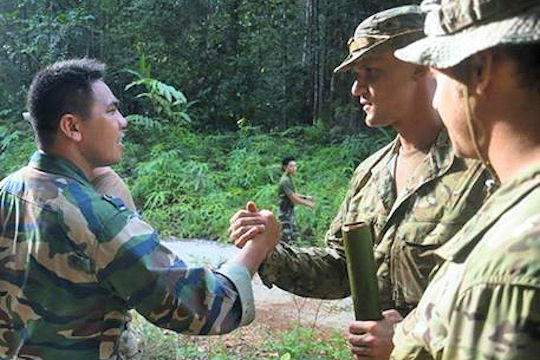 Closing ceremony at Mersing, Johor on February 19th marking the completion of the joint training between the Canadian Special Operations Regiment (CSOR) and the Grup Gerak Khas (GGK) of the Malaysian Army.

Canada’s security and defence cooperation with Malaysia continues to expand with the conclusion of the first formal exercises in Mersing, Johor. The exercise is part of a three-year reciprocal exchange program involving forces from both countries co-training in different extreme environments and combat techniques.  The RM12 million ($4.2 million) initiative is funded by Canada’s Department of National Defence, and is led by Canadian Special Operations Forces Command (CANSOFCOM) of the Canadian Armed Forces.

With over RM29 million ($10 million) in recent funding, Canada remains committed to the enhancement of security cooperation with Malaysia.  Key areas of cooperation include counter-terrorism, nuclear security, migrant smuggling, and border security.

Canada’s Bombardier jets onto the scene 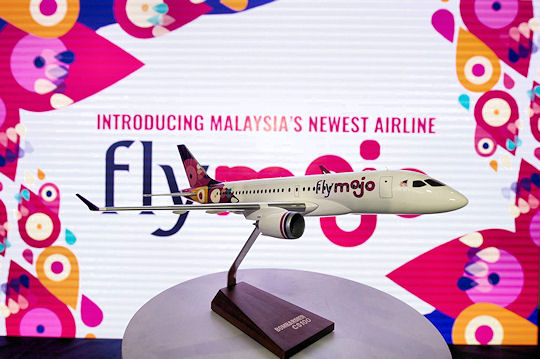 A model of the new Bombardier CS-100 ai.

Readying for takeoff, Canada’s Bombardier C Series aircraft will soon soar above Malaysian skies as the country’s latest airline, flymojo, becomes the first carrier in the region to feature the 100% new CS-100 planes.

Designed by Montreal-based Bombardier Inc., the CS-100s  are optimised for the  100 to 149-seat, single-aisle fleet category of airplanes, making it the ideal aircraft for new airlines like flymojo to cover markets efficiently thanks to its exceptional economics, operational flexibility and design comfort, coupled with an unmatched environmental and noise footprint.

From flymojo’s hubs in Johor Bahru and Kota Kinabalu, the ultra-modern fleet of CS-100 aircraft will enhance connectivity between the Peninsula and Sabah and Sarawak, and beyond.  Flymojo’s operations are expected to begin later this year.

Did you know?  Bombardier has been transporting millions of Malaysians for over 20 years on the Kelana Jaya LRT system, the automated people mover system at the KLIA, and the KL Sri Petaling and Ampang Lines, formerly known as STAR LRT.

While in Johor, she also toured the facility of Celestica Inc., a Canadian electronics manufacturing services company employing more than 4,500 people at its three facilities in Johor.  A key highlight of the tour was the demonstration of a mobile defibrillator machine that speaks, guiding the user as they save a life!

Johoreans came out in droves for a “Doing Business with Canada” seminar and networking reception to meet the Canadian companies who joined the High Commissioner on her visit.

If you missed the seminar, don’t worry.  Our team is always ready to help explore trade and investment opportunities with Canada. Drop them a line at my.commerce@international.gc.ca 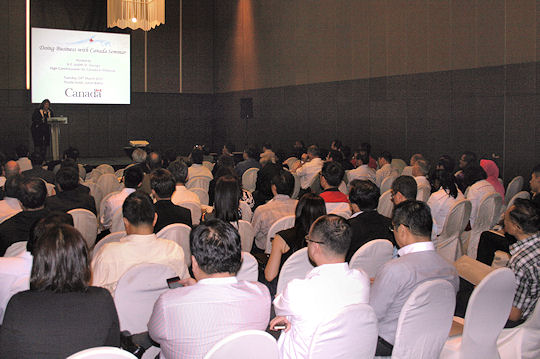 Great turnout at the “Doing Business with Canada” seminar. 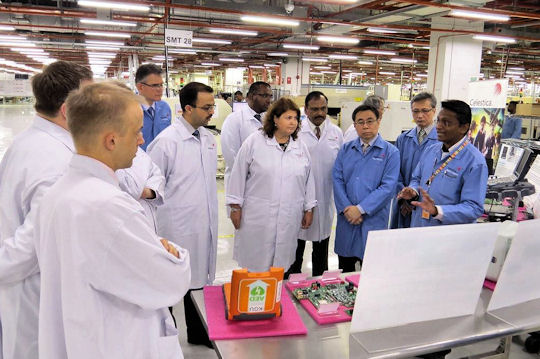 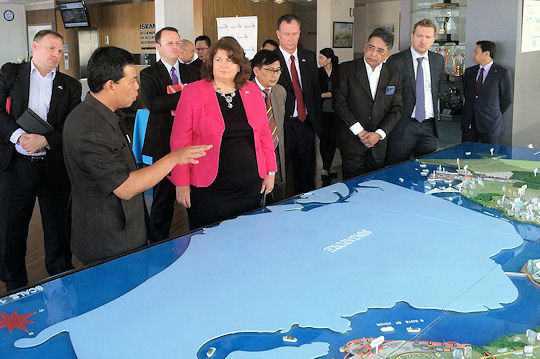 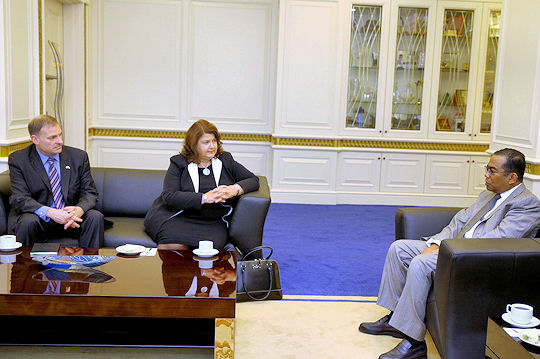 The Maple Leaf comes to Malaysia 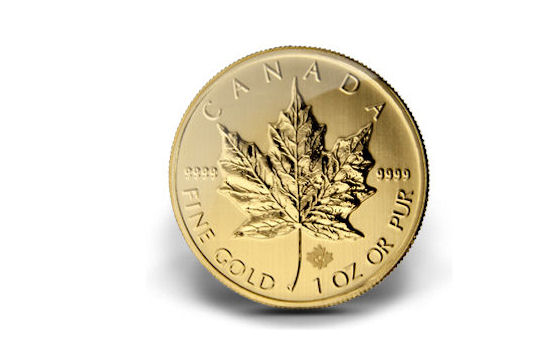 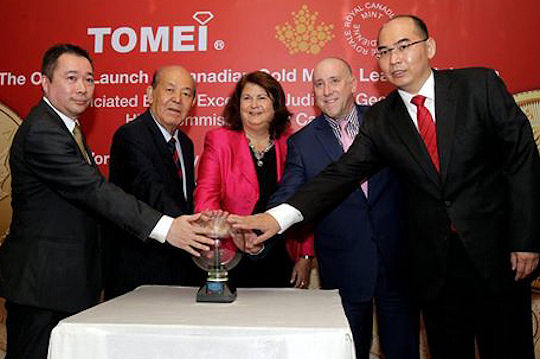 Have a 1997 twenty sen coin in your pocket?  Did you know it was struck in Canada by the Royal Canadian Mint?  In its latest entry to Malaysia, the Royal Canadian Mint is proud to announce a partnership with Tomei Gold & Jewellery to distribute its world-famous Gold Maple Leaf range in Malaysia, the first consumer-specific partnership in the country.  Highly prized for its exceptional 99.99% purity, the Royal Canadian Mint’s Gold Maple Leaf (GML) bullion coin boasts unprecedented security, assuring investors of its authenticity and quality. The collection is available at all Tomei retail outlets across Malaysia.

The Royal Canadian Mint is responsible for the minting and distribution of Canada’s circulation coins, and produces coins and banknotes for many other countries in the world: www.mint.ca

One of the world’s most recognisable and talented musicians (and Asia’s Got Talent judge), David Foster will be performing live in Malaysia on August 14, 2015 at the Arena of Stars, Genting.  Ticketing information at http://www.rwgenting.com/shows/events/DFAT/

Possessing one of the best jazz vocals in modern times, Diana Krall will be performing with Malaysia’s very own Malaysia Philharmonic Orchestra on February 15, 2016 at the Dewan Filharmonik Petronas. Get your tickets at http://mpo.com.my/40-diana-krall-wallflower-world-tour/ 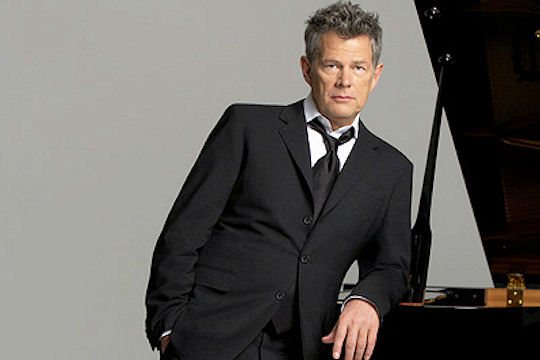 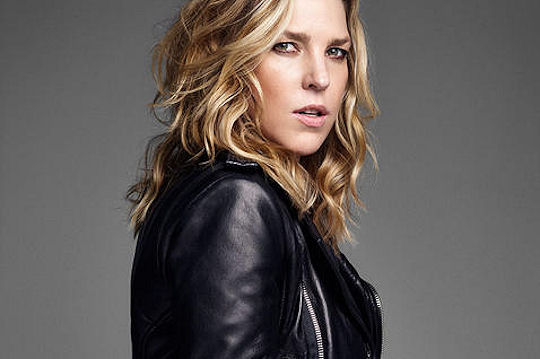