On November 4, 2015 Canada formed the 29th Ministry and, for the first time in our history, an equal number of women and men are seated around the cabinet table. Under the leadership of Prime Minister Justin Trudeau, Canada will continue to champion its longstanding priorities in human rights and good governance, while establishing new initiatives in the global fight against climate change and a number of other sectors.

“Canada is strong not in spite of its diversity, but because of it.” 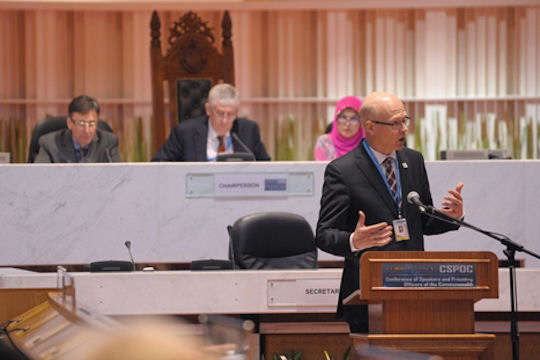 The Honourable Geoff Regan, M.P., discussing “The Role of Speakers in the Security of Parliaments and the Precincts” at the 23rd Conference of Speakers and Presiding Officers of the Commonwealth.

The High Commission was pleased to welcome The Honourable Geoff Regan, M.P., Speaker of the House of Commons of Canada, to Malaysia for the 23rd Conference of Speakers and Presiding Officers of the Commonwealth held in Kota Kinabalu from 9-14 January 2016. The Conference drew 200 delegates from 50 countries, and had as its goals to maintain, foster and encourage impartiality and fairness on the part of speakers and presiding officers and parliaments; promote knowledge and understanding of parliamentary democracy in its various forms; and develop parliamentary institutions. Speaker Regan delivered a keynote address on “The Role of Speakers in the Security of Parliaments and the Precincts” – a subject on which Canada developed considerable expertise on 22 October 2014 during an attack on its Parliament. In his speech Speaker Regan argued that “In a democracy, it is our duty as Members to ensure that it is truly the people’s Parliament, and that it remains that way. While security is paramount, we cannot lose sight of the fact that the openness that makes us vulnerable is the freedom that keeps us strong.”

One child marriage is one too many: Canada campaigns against child, early and forced marriage 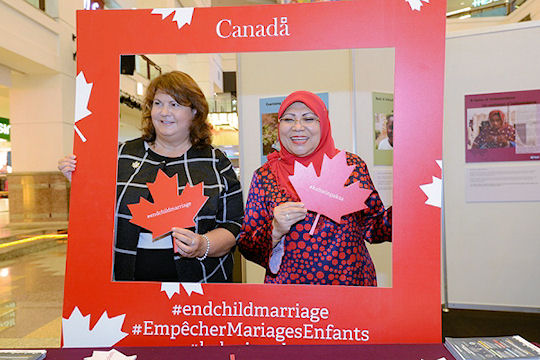 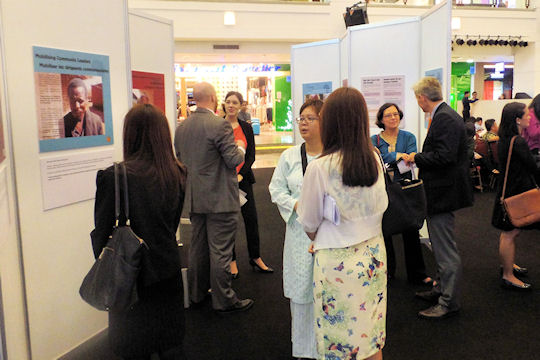 The High Commission of Canada held a public photo exhibit, Girls’ Voices: Speaking Out Against Child Marriage, from 25-28 February, 2016, at the Berjaya Times Square shopping mall in Kuala Lumpur. The exhibit was produced by the Government of Canada in collaboration with Girls Not Brides, a global partnership of over 550 civil society organisations.

The launch event on 25 February featured a speech by High Commissioner Judith St. George, and a keynote address by the Minister of Women, Family and Community Development, YB Dato’ Sri Rohani Abdul Karim. YB Dato’ Sri Rohani recognized that child marriage occurs in Malaysia, expressed her strong opposition to the practice and urged Malaysians to pledge to protect their children from all harmful practices, including child marriage.

Every year, an estimated 15 million girls worldwide are married before their 18th birthday – some as young as eight or nine. Taken together, an estimated 700 million women alive today were married as children. Canada views child, early and forced marriage (CEFM) as a harmful practice that threatens the lives and futures of girls around the world, violating their human rights, disrupting their education, jeopardising their health, making them more vulnerable to violence and limiting their participation in society and the economy.

Canada has shown leadership on CEFM by spearheading the initiative to create the International Day of the Girl, developing substantive resolutions at the United Nations, and investing RM247 million (CAD$80 million) in programming support to Canadian and civil society partners worldwide. 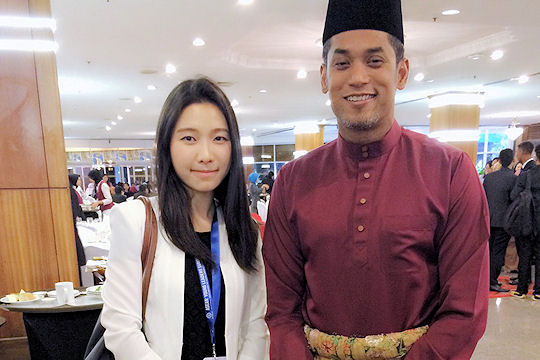 On November 18-20, 2015, Malaysia hosted the ASEAN Young Leaders’ Summit (AYLS) in Kuala Lumpur on the margins of the 27th ASEAN Summit and prior to the East Asia Summit (EAS). This impressive event brought together 300 delegates aged 18 to 30 from ASEAN member states, ASEAN Dialogue Partner countries and local organisations, and produced eight regional policy recommendations for the Chair of ASEAN. Given that approximately 60% of ASEAN’s population is under the age of 35, young people represent an increasingly important priority for ASEAN member states.

Ten young Canadians participated in the Summit and had the opportunity to work with their counterparts from across ASEAN and dialogue partner countries on issues of mutual concern. The group also had the chance to engage with Malaysian Minister of Youth and Sports Khairy Jamaluddin and former Prime Minister Tun Abdullah Ahmad Badawi.

"AYLS was a remarkable experience for me, I made invaluable connections across Southeast Asia including with the Minister of Youth and Sports Khairy Jamaluddin himself! One of my favourite moments from the conference was the discussions with young leaders from ASEAN member states on human rights and migration issues. I am very thankful for the opportunity to represent Canada and I look forward to Canada's growing presence in Southeast Asia and support for the involvement of Canadian youth in ASEAN."

As a Pacific nation and a committed dialogue partner of ASEAN since 1977, Canada’s relationships with its Asia Pacific neighbours are a key priority. Central to this priority is recognition of the shared security challenges linked to regional stability and economic prosperity. Canada actively participates in the ASEAN Regional Forum and has demonstrated interest in furthering its integration into regional multilateral forums. Bilaterally, building on a longstanding history of security cooperation, Malaysia and Canada have strengthened their partnership in the areas of migrant smuggling, counter-terrorism, and military training exchanges. Canada has dedicated over MYR31 million (CAD $10 million) to security cooperation initiatives with Malaysia in recent years. 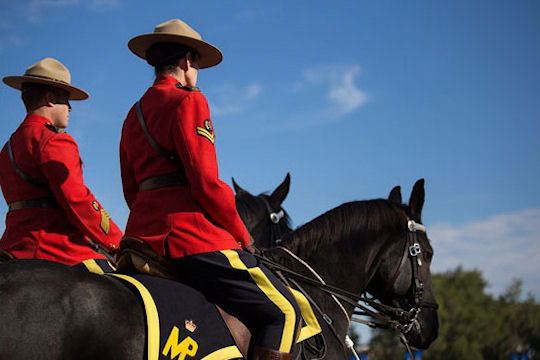 Canada is providing a range of training focussed on capacity-building for Malaysian officials in human smuggling, border security and counterterrorism. In March, 2016, the Royal Canadian Mounted Police (RCMP) delivered a course on human smuggling investigations to the Malaysian Maritime Enforcement Agency (MMEA), the fourth such course related to enforcement training. That same month the RCMP also delivered its ninth course to the Royal Malaysia Police (RMP), focussed on money laundering and countering the financing of terrorism.

Ship visits are a highly visible and important demonstration of international cooperation. Royal Canadian Navy vessels have paid many calls on Malaysian ports over the years. Most recently HMCS Winnipeg  stopped in Penang in February 2016 en route back to Canadian Forces Base Esquimalt following 254 days at sea in the Pacific Ocean and Caribbean, and in the Mediterranean Sea under the NATO mission Operation REASSURANCE. Honorary Consul for Canada, Dato’ Tan Yew Thong, was on hand to welcome the ship and witness a change of command. 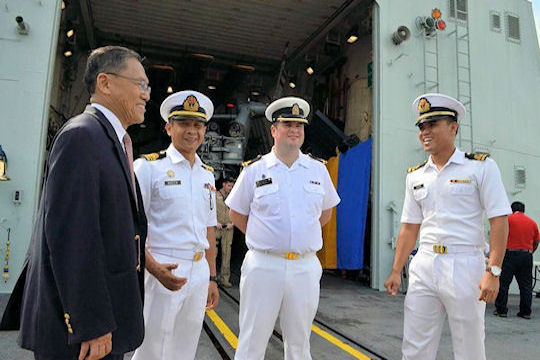 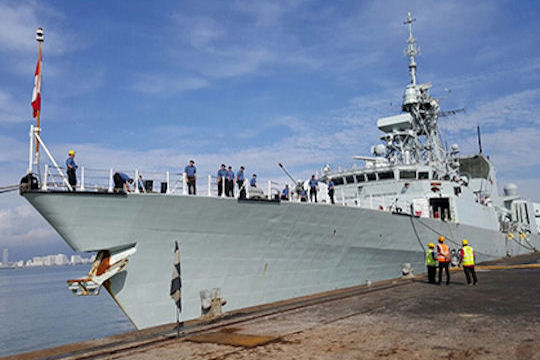 Canada has been a leader in peace operations since former Prime Minister Lester B. Pearson spearheaded the development of peacekeeping during the 1956 Suez Crisis. To date, over 125,000 Canadians have served in close to 50 UN missions. In Malaysia, Canadian Armed Forces logistics officer Major Dan MacNeil is completing a two-year posting to the Malaysian Peacekeeping Centre (MPC) in Port Dickson, where he helped expand the Centre’s training capacity on UN mission logistics. On October 2, 2015, High Commissioner St. George visited the MPC and presented certificates to graduates of the United Nations Logistics Course 16/15.

Canada and Malaysia are currently engaged in a comprehensive three-year Special Forces training exchange program to strengthen operational capabilities on counter-terrorism. Malaysia is the only country in the Asia-Pacific region benefitting from this unique arrangement. The MYR 13 million (CAD$ 4.2 million) program is funded by the Canadian Department of National Defence and is led by Canadian Special Operations Forces Command (CANSOFCOM) of the Canadian Armed Forces. In February-March 2016, the participating units conducted their third engagement in Malaysia. In May 2016, Canada will host 20 Malaysian soldiers for the next combined training opportunity. 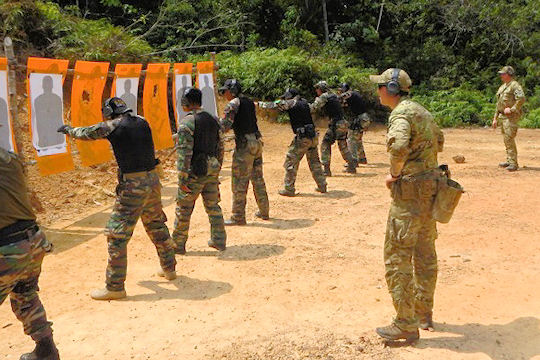 CANSOFCOM and MAF members on the shooting range. 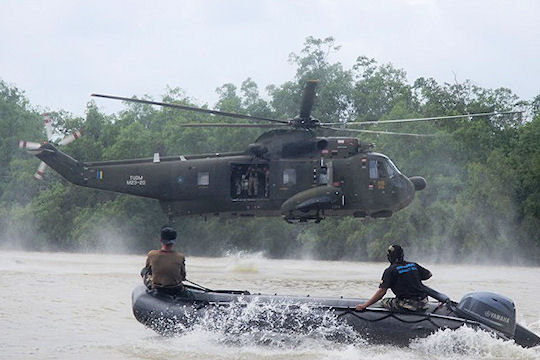 Since 1990, Canada has supported the efforts of civil society groups in many countries around the world, including Malaysia, to push for positive change in their societies through the Canada Fund for Local Initiatives (CFLI). In 2015-2016, the High Commission of Canada in Malaysia supported four projects in Malaysia, focusing on: protecting the rights of refugees; an anti-corruption advocacy campaign; promoting religious diversity through the arts; and the creation of nationwide standards for domestic violence shelters. 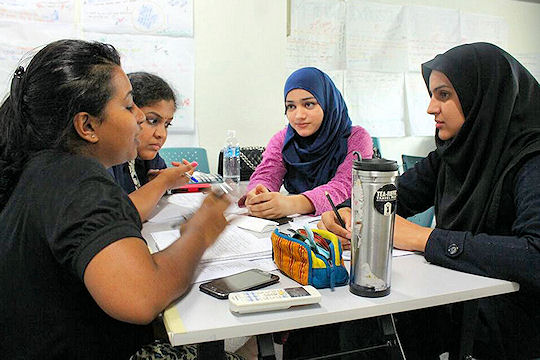 Capacity-building of community interpreters for refugees and asylum seekers

Through support from the CFLI, Asylum Access trained a group of 45 community interpreters who will now be able to help refugees and asylum seekers access basic services. Local aid organisations often face difficulty in providing assistance to these communities due to language barriers. As a result of this training program, aid workers will be able to address specific mental health and sexual and gender-based violence issues faced by refugees. Two key documents have been created through this project to be utilised by aid organisations nationwide: a national database and roster of available and qualified interpreters; and a glossary of terms of reference by interpreters. 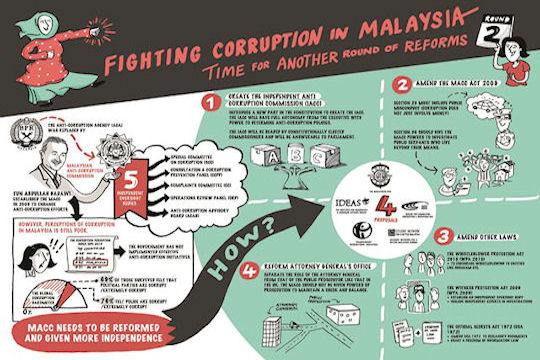 Infographic on recommendations to reform the MACC by IDEAS.

The Institute for Democracy and Economic Affairs (IDEAS):

As a think-tank dedicated to addressing some of Malaysia’s most complex public policy challenges, IDEAS’s project under the CFLI was aimed at advocating for constitutional and legislative reforms to the MACC. The project carried out a series of activities nationwide aimed at educating the public on corruption issues through interactive public forums in Kuching, Kuantan, Ipoh and Kuala Lumpur; media activities and social media campaigns; and making recommendations to key stakeholders in the government and civil society. 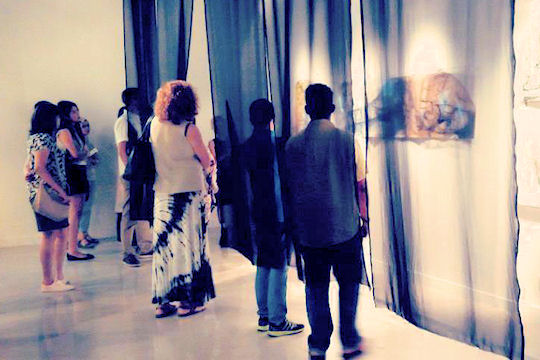 Using social media as its main outreach platform, Projek Dialog promotes open dialogue on diversity and inclusion in Malaysia. This CFLI-supported project brought together eight young artists who embarked on interfaith visits to different places of worship in the north-eastern state of Kelantan. These included: Masjid Kampung Laut, the oldest mosque in Malaysia; Thai and Chinese Buddhist temples; a Catholic church; a Hindu temple; and Sikh Gurdwara in Kota Bharu. They also witnessed the Sewang ritual, a traditional healing dance from the Orang Asli Temiar community; and the Main Puteri rites, an indigenous Kelantanese healing ceremony. Following these visits, each artist produced artwork in the medium of their choice inspired by their experience and dialogue with religious leaders. The artwork garnered national attention through an exhibition at the National Visual Arts Gallery from February 24 – March 16. 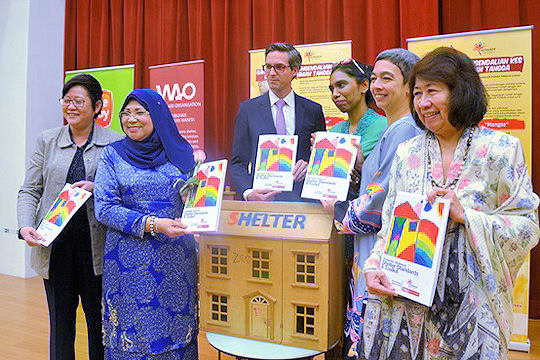 Launch of the Domestic Violence Shelter Standards and Toolkit.

With funding from the CFLI, the Women’s Aid Organisation (WAO) collaborated with survivors of domestic violence, NGOs and government agencies to develop and release the Domestic Violence Shelter Standards and Toolkit to expand the availability of safe spaces for women and children facing domestic violence. Launched on March 9, 2016 by WAO and the Minister for Women, Family and community Development, Dato’ Sri Rohani Abdul Karim, the project is an excellent example

of collaboration and partnership between civil society and government. In addition to promoting standards and services for shelters, the publication will also strengthen the capacity of care providers and encourage the start-up of more shelters for women surviving domestic violence.

On January 17, 2016, the High Commission of Canada in Malaysia held its annual Study in Canada Fair in Kuala Lumpur. Sixteen institutions from across Canada were present to provide information on various study options in Canada. Attended by over 600 visitors, the fair featured a wide range of programs, including engineering, business, actuarial sciences, computer science and pre-university studies.

As one of Klang Valley’s most integrated public rail transportation systems, the Putra Kelana Jaya Line operated by RapidKL, is a 29 km light rapid transit (LRT) system network which currently runs from Kelana Jaya to Gombak and is the fourth longest fully automated driverless metro system in the world. In 2006, the Malaysian government announced an extension of this line to the suburbs of Subang Jaya, covering a distance of 17.4km. The total length of the Kelana Jaya Line upon completion of the LRT will be 46.4km.

The extension utilises 14 new-generation trains called the Innovia Metro 300 which are designed, constructed and tested at Bombardier’s Centre of Competence for Mass Transit Systems in Kingston, Canada and will be completed by a local production team at the Westport Malaysia, Port Klang facility. The project is expected to be completed in the second quarter of 2016.