On behalf of all of my colleagues at the Embassy of Canada in Ulaanbaatar, I would like to welcome you to our website.  I hope you find the information on these pages to be a useful starting point in learning more about the services we offer and about Canada’s relations with Mongolia.  I also invite you to follow us on social media in English (@CanadaMongolia) and French (@CanadaMongolie). 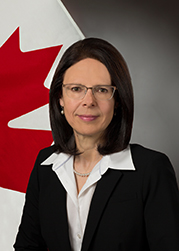 Catherine Ivkoff (BA Hons [French and Political Science], University of Western Ontario, 1988; LLB, University of Western Ontario, 1994) joined the Department of Foreign Affairs and International Trade in 2003. At Headquarters, she was an officer on the Russia desk in the Eastern Europe Division from 2004 to 2006 and a legal officer in the United Nations, Human Rights and Humanitarian Law Section from 2010 to 2012. Overseas, she served in Russia from 2006 to 2010 as second secretary (political) and in Kazakhstan from 2012 to 2015 as political counsellor. Most recently, she was deputy director of the Economic Law Section. She was appointed as Ambassador of Canada to Mongolia in October 2019.