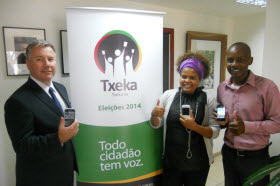 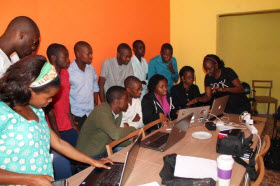 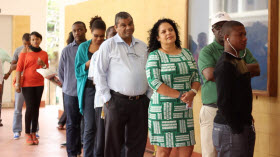 Mozambicans going to the polls just outside Maputo

Funded by the Canada Fund for Local Initiatives, the Canadian High Commission in Maputo  partnered with Mozambican and Kenyan non-governmental organizations (NGOs) to develop a Portuguese-language Web-based application that empowered ordinary citizens to use their smartphones to report on election irregularities in the lead-up and on the day of Mozambique’s national election, which was held October 15, 2014.

The application is called Txeka (Mozambican slang for ‘‘check it’’), and is based on a platform developed by Kenyan NGO Ushahidi.

The Txeka app was made available for Android phones in Google Play and for Apple phones in iTunes. Users across Mozambique could download the app for free. With the app, they could send reports, photos and videos to the Txeka team of 20 analysts in Maputo who were trained by teams of Ushahidi specialists. Certified election observers also receiving training on how to use Txeka and were deployed across Mozambique. Ushahidi Kenyan representatives were on hand on election day to help process the data that came in.

During the lead-up to the election, the Txeka team in Maputo uploaded information they received on irregularities to an online live map of Mozambique on the Txeka website. Citizens without smartphones (hence without the Txeka app) sent text messages directly to the Txeka team.

On election night a ‘‘situation room’’ was set up in Maputo by Mozambique’s largest television network with participants from the Government of Mozambique, the National Elections Commission, civil society organizations, the main political parties, and the media.

The Txeka map was a key feature of the election night discussion, and provided key real-time data that allowed stakeholders to discuss the concerns of citizens on the fairness and transparency of the election process. The Txeka team received more than 3,000 messages from Mozambicans from across the country.

The High Commission is beginning conversations with other civil society and multilateral organizations to explore how we can creatively use social media platforms such as Txeka as tools to help achieve other governance-related objectives. Crowdsourcing has been used effectively in rural India to reveal patterns of chronic teacher absenteeism, which contributes to degrading the quality of education available to village children. Similarly, communities in Peru have used a Txeka-type of social media platform to report on the lack of availability of critical drugs in rural hospitals. Both of these are issues in rural parts of Mozambique as well.

Properly used, social media can provide unique opportunities for ordinary citizens to identify breakdowns in the delivery of public goods, which can, in turn, lead to increased demands for better and more accountable governance.

As the availability of the Internet and communications technology increases in developing countries such as Mozambique, opportunities to use social media as a tool to advance good governance will only continue to grow. Supporting local civil society groups such as Mozambique’s “Eye of the Citizen,”—a group of Mozambican bloggers using citizen journalism to address current social and political problems, and the principal NGO behind Txeka—and encouraging the sharing of technologies and lessons learned from groups such as Ushahidi, are increasingly important ways that can help turn these opportunities into reality.