Campus journalists in Davao pose for a class photograph during the Mindanao Summer Institute of Journalism. 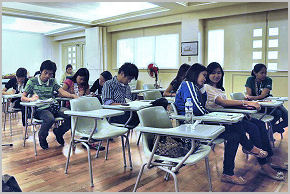 Campus journalists attend lectures and workshops to improve writing and reporting skills at the annual Mindanao Summer Institute of Journalism. 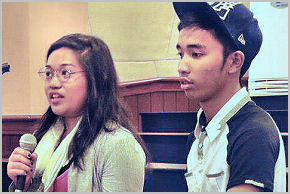 3rd: Students get to simulate a press conference by asking the right questions in the Mindanao Summer Institute of Journalism.

The Canadian Embassy in the Philippines  hosted a workshop on ethical and responsible journalism for campus journalists in Davao City, the country’s 3rd metropolis.

Although the Philippines has the most liberal media in Southeast Asia, it can also be one of the most dangerous places for journalists: in 2009, 58 members of the media were killed in Maguindanao province in southern  Mindanao as they accompanied a gubernatorial candidate in filing his candidacy in a politically-sensitive region.

Most journalists outside of Manila are not professionally or academically trained as news reporters and in recent years, this has resulted in gaps in ethics and professionalism.

As an advocate and a partner of human rights issues in the Philippines, Canada promotes and supports skilled and responsible journalists who strengthen the democratic process. This initiative is one of the ways Canada is encouraging press freedom in the Philippines.

“Canada is known here as an active supporter and partner of the local media especially in building capacity in improving reportage – to make it responsible and accurate, understanding the role of media. It was natural that we should do something on ethics upon learning that most journalists in the provinces outside Manila are not professionally or academically-trained as news reporters.  And what better way to start than to train students training to become journalists.”  -Ambassador Christopher Thornley

The Mindanao News and Information Cooperative Center has been hosting the annual workshop for the past seven years. Its efforts have improved the capacity of campus journalists, mass communication students, and young practicing media personnel in the basics of reporting.

The workshop covered topics such as media literacy and ethics, basic news writing and reporting, and multimedia reporting.

Held at the 6th Annual Mindanao Summer Institute of Journalism, 30 students from the top schools in the region benefitted from six award-winning Philippine journalists from various backgrounds and experience. Student Kristelle Omar reflected on the weight of responsibility that the title of journalist bears:

“The title of ‘journalist’ seems to be so easily given away. What most people don’t realize is that you have to earn the right to be called a journalist. After the seminar, all of us understood the weight that the title brings. That’s what made me and the rest of the participants not want to raise our hands. We felt like we were not good enough to deserve that title. We wonder if we could fill in the shoes of those who have come before us. But we stayed. And that must count for something.” -Kristelle Omar, participant

Speakers included two former Marshall McLuhan fellows – journalists who were awarded a fellowship by the Canadian Embassy in the Philippines for excellence in investigative journalism.

The Embassy’s public affairs officer, Carlo Figueroa, spoke to students about media literacy and the importance of an ethical foundation:

“As an officer of the embassy and as an educator, I am happy that we can support training activities such as this that makes an impact as the youth study to become future journalists and media practitioners.  I have seen how journalists even with all their writing skills, can still fall short of their real role in society if they forget their profession’s ethical principles.  It is best to firm up the foundation of ethics and the real role of news media when these students are still idealistic and malleable.”

The Canadian Embassy will continue to support training activity, in hopes of expanding the program to include other marginalized sectors in the Philippines.

Aside from the embassy and the Mindanao News and Information Cooperative Centre, the University of Mindanao was also a co-organizer of the event.