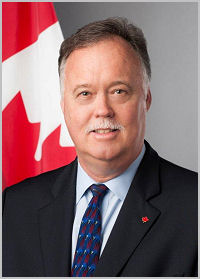 In his remarks before President Aquino, Ambassador Reeder reiterated Canada’s commitment to assist the Philippines in the aftermath of typhoon ‘Yolanda.’

“Canadians including the Filipino community in Canada are reaching out to raise funds and assist those in need in your country,” Ambassador Reeder said.

“We are all deeply impressed by the resilience and determination of the people of the Philippines to re-build and to recover from this tragedy, and by the on-going work of your Government to lead the disaster relief and reconstruction effort. In that regard, Canada has stood up to help through humanitarian assistance and with the presence of Canadian Armed Forces personnel in Panay Island where they will provide safe water, medical and engineering services to your citizens, working closely with the local authorities,” he added.

Ambassador Reeder also underlined that efforts will continue to deepen bilateral trade relations between the Philippines and Canada.

“The Government of Canada seeks to further expand commercial relations with the entire Asia-Pacific region as part of Canada’s Prosperity Agenda. In that respect I will work closely with the Philippine government to build bilateral trade and investment ties for the benefit of both countries.”

Ambassador Reeder has been with the Canadian Foreign Service since 1981 and has been posted to Canadian missions in Rabat, Washington, and Hong Kong. He was also appointed Deputy Head of Mission in Mexico, High Commissioner of Canada to Brunei-Darussalam, and Ambassador to Costa Rica with concurrent accreditation to Nicaragua and Honduras.

In Ottawa, Mr. Reeder undertook assignments in the East Asia Division, the Francophone Africa Division, and the Caribbean and Central America Relations Division. He also served as Public Liaison Officer in the Arms Control and Disarmament Division. He was a foreign policy analyst for Asia Pacific in the Foreign Affairs and Defence Secretariat in the Privy Council Office, where he was awarded a Public Service Outstanding Achievement Award by the Clerk of the Privy Council.

Ambassador Reeder received his bachelors’ degrees with honours: His B.A. from the University of Saskatchewan, and his journalism degree from Carleton University.

People to people links between Canada and the Philippines continue to be very strong. There are more than 700,000 Canadians of Filipino origin in Canada. “We are very proud of the many Canadians of Filipino origin who now live and work in our country. These hardworking people have made a major contribution to Canada. The community of Canadians of Philippine origin contributes to Canada’s diversity, prosperity and its success as a nation,” said the ambassador.