Joining forces in the fight against child, early and forced marriage 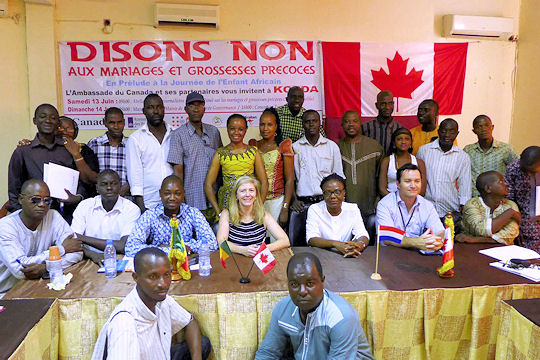 Local journalists attend a training workshop to address challenges and solutions to reporting on CEFM issues. 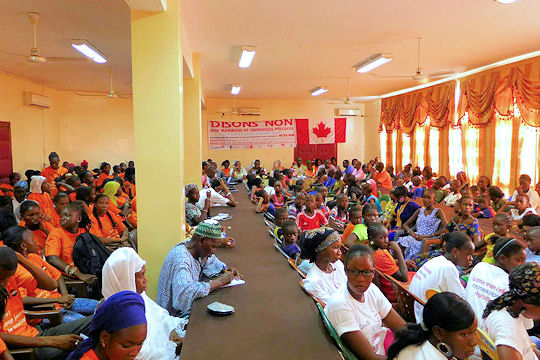 Members of the Kolda community attend a panel discussion to learn about CEFM prevention. 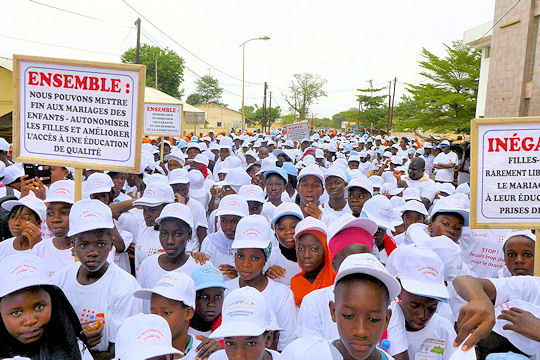 Thousands take to the streets of Kolda to rally against CEFM. 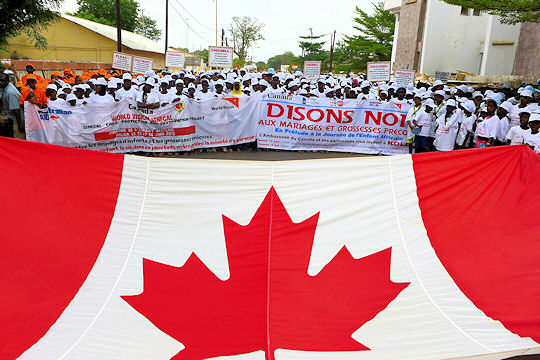 Advocates against CEFM march with a large Canada flag. 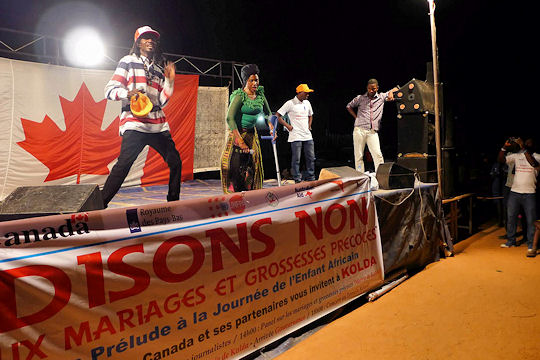 Local artists take the stage to present a lively performance against CEFM.

It is estimated that every year, 15 million girls under the age of 18 are forced into child marriage. The harmful practice of child, early and forced marriage (CEFM) denies girls their rights and abruptly ends their childhoods. Canada is determined to help solve this global problem and has identified ending CEFM as a foreign policy and development priority.

Ending CEFM cannot be tackled alone and requires mobilization of the global community. By working together, we can ensure that daughters and granddaughters can experience full childhoods without the threat of CEFM.

In Kolda, Senegal, where 48 percent of girls in the region are married before their 18th birthday, the Embassy of Canada to Senegal led a coalition of partners – including the Government of Senegal, the Netherlands Embassy, UNFPA, World Vision Australia, Girls Not Brides, and PADEC – for a series of local events to raise awareness and identify local solutions to CEFM in Kolda.

From a training session for local journalists and a town-hall style panel for youth and community leaders to a march through the city and a concert featuring local hip hop artists, the activities organized by the partners aimed to investigate the risks linked to CEFM, finding ways to reduce incidents of CEFM, and promoting the protection of children’s rights.

Journalists give voice to the voiceless

The first event held in Kolda was a training session and discussion group for local journalists. Over two dozen participated, with an especially strong participation of local radio stations. With low literacy rates in rural areas, radio is often the only source of outside news most Koldalese residents receive.

The session served as an opportunity for journalists to discuss the challenges they face when reporting on CEFM issues and to share best practices. Many identified issues such as language barriers, ethnic bias, the culture of denunciation, the burden of responsibility between parents and girls, and the lack of a ‘one-stop-shop’ to address problems related to CEFM.

For many of the participating journalists, the training session was the first time they had been recognized as a central influencing group in the fight against CEFM. The training has helped these journalists recognize the importance of broadcasting stories against CEFM, by giving them power to make real social change in Kolda.

Over 400 youth, government officials and community leaders gathered on a sweltering afternoon to participate in panel discussion on CEFM in the Kolda region. The panel was moderated by Kolda’s Deputy-Mayor, Daouda Sidibé, a former academic who wrote his thesis on CEFM, as well as a representative from the regional council.

Health, education and right-based approaches to combating the practice of CEFM were the topics addressed during a half-day panel discussion. In addition to the panel, the event featured a theatrical presentation and impassioned interventions from several young members of the audience. The event helped convey important messages about universal rights, the benefits of education to development, and the practice of abstinence as a way to ensure health and happiness for young boys and girls.

Marching together to end CEFM

The Embassy, partnering with UNFPA and World Vision, rallied the community in a united march from Kolda’s City Hall to the Government House. Nearly 3000 people came out to support the march, an impressive and stunning symbol of the community’s hope of ending CEFM through cooperation and awareness.

The march concluded with an impromptu press conference of all participating authorities from the region, including the Governor, the Prefect, Deputy Mayor, as well as the Embassy of Canada and its partners UNFPA and World Vision.

To cap off the CEFM campaign in Kolda, the Embassy organized an evening concert and theatrical performance, featuring a wide selection of extremely talented local artists, many of whom are advocates against CEFM in their communities. Some of the artists have even composed their own songs in local languages about the fight against CEFM. The evening performances conveyed emotional messages against CEFM that resonated with the audience of over 600 youth and parents.

While the concert marked the end to the weekend of CEFM activities in Kolda, Canada will continue working collaboratively to end CEFM in Senegal and around the world.

The Embassy of Canada to Senegal was proud to lead the fight against CEFM in Kolda by engaging actors from all facets of society – from victims, youth and advocates, to government officials, community leaders and journalists.

Through a united front, Canada looks forward to achieving a future without the harmful practice of CEFM.