I am honoured to be representing Canada in Sudan, a country with rich culture and traditions.

I hope you find our website useful in providing information on Canada’s relations with Sudan and Eritrea and as a gateway for learning more about the services we offer.

Canada established bilateral relations with the Government of the Republic of the Sudan in 1961. Canada’s strategic priorities in Sudan seek to advance human rights, the rule of law, and democracy; to reduce poverty and increase gender equality and the empowerment of women and girls; to address the emergency needs of crisis-affected populations, and to advance regional security and stability.

Canada provides international assistance in Sudan through development, humanitarian and peace and security programs. Guided by Canada’s Feminist International Assistance Policy and through the bilateral development program announced in 2020, Canada’s support focuses on improving access to education and strengthening the resilience of the poorest and most marginalized. Canada’s gender-responsive humanitarian assistance supports the provision of food, nutrition, health, shelter, water, sanitation and protection, as well as initiatives to meet the specific needs and priorities of women and girls including sexual health and reproductive rights. Canada’s peace and security funding supports women’s participation and the inclusion of gender perspectives in the political transition, and the monitoring and increased accountability for human rights violations, including against women and girls, and marginalized groups.

Canada does not currently have trade agreements in place with Sudan and it has a modest trade relationship with the country. Canadian exports to Sudan are mostly composed of farm, fishing and intermediate food products. Canadian direct investments in Sudan are mainly concentrated in the mining sector. Please note that the Canadian Trade Commissioner Service (TCS) offers services in Sudan and Eritrea, in collaboration with colleagues in Khartoum, through its offices at the Embassy of Canada in Ethiopia.

As for Eritrea, Canada established diplomatic relations shortly after Eritrea gained independence in 1993. Canada is represented in Eritrea through its Embassy based in Khartoum, Sudan, and an honorary consul in Asmara. Canada’s priorities in Eritrea seek to promote human rights, democracy and the rule of law, civil liberties, and freedom of the press and association, as well as regional security and stability. The commercial relationship with Eritrea is modest with limited exports and imports between the two countries. Most of the Canadian commercial relationship with Eritrea is centered on Canadian investment in the mining sector.

I strongly encourage Canadian citizens and residents working or visiting Sudan or Eritrea to keep abreast of Canada’s Travel Advisories and Travel Reports and to take a moment to register with the Embassy Consular Section using the Registration of Canadians Abroad (ROCA) webpage.

From 1986 to 1990, as a member of the Law Society of Alberta, Mr. Lupul was a lawyer in private legal practice in Edmonton, Alberta.  From 1989 to 1990, he also served as a lecturer with the University of Alberta, designing and delivering public legal education programs.

Mr. Lupul joined the Department of External Affairs and International Trade Canada as a professional Foreign Service Officer in 1991, then later transferred to Citizenship and Immigration Canada (CIC) where he served in a number of headquarters and overseas assignments.  Highlights include service as Manager of the Immigration Litigation and Appeals Unit in New Delhi, India (1997 to 2001), Head of Kosovo Refugee Crisis Field Operations based in Skopje, North Macedonia (1999), Immigration Program Manager in Detroit, USA (2001 to 2005) and lead on various international immigration cooperation matters at CIC headquarters in Ottawa, Canada (2006 to 2008).

Mr. Lupul rejoined the Department of Foreign Affairs and International Trade Canada (DFAIT) in 2008 where he worked in Consular operations and policy.  From 2009 to 2012, Mr. Lupul was posted to Afghanistan as Political Director of the Kandahar Provincial Reconstruction Team (KPRT) and was the last Canadian official to leave Kandahar province after completion of the Canadian civilian and military mission to the province.

In 2013 to 2015, as Director of Consular Policy and Programs at DFAIT headquarters with responsibility for strategic initiatives, Mr. Lupul was a founder and led the secretariat that successfully established the Global Consular Forum (GCF), the first multilateral body dedicated to enhanced international cooperation and knowledge sharing in consular affairs.

From 2015 to 2018, Mr. Lupul served as Director at the Canadian Embassy in Kabul, Afghanistan, responsible for Political, Economic, Trade and Public Affairs programs.  As lead for Canada’s engagement in the Rule of Law sector, Mr. Lupul served as International Co-Chair of the International Police Coordination Board (IPCB), coordinating donor assistance to the Government of Afghanistan on policing and security sector reform issues.

From 2018 to 2021, Mr. Lupul was posted at Global Affairs Canada (GAC) headquarters as Deputy Director and Senior Counsel in the Criminal, Security, Cyber and Diplomatic Law Division.  As GAC lead on cyber law, he was a member of the Canadian delegation to negotiations under the Council of Europe’s Budapest Convention on Cybercrime that successfully delivered a new Protocol for enhanced international cooperation in combatting cybercrime and handling of digital evidence.

Mr. Lupul joined the Embassy of Canada in Khartoum as Ambassador Extraordinary and Plenipotentiary to the Republic of the Sudan in January 2022. 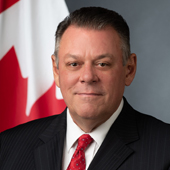