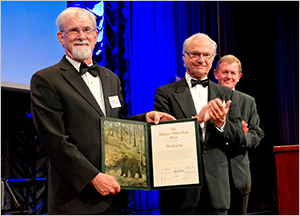 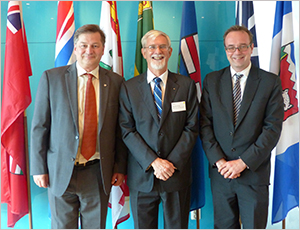 At a ceremony in Stockholm on 23rd September, H.M. King Carl XVI Gustaf awarded the 2013 Marcus Wallenberg Prize to Professor Derek Gray of McGill University in Montreal. The Embassy of Canada later hosted a networking event in honour of Professor Gray’s achievement, which represents the sixth time the Prize has been awarded to a Canadian. The event was attended by Tom Rosser, Assistant Deputy Minister of the Canadian Forest Service of Natural Resources Canada.

Professor Gray received the Prize for his pioneering work on nanocrystalline cellulose (NCC), the rigid, needle-like crystals of cellulose chains which are liberated when a process of strong acid hydrolysis is applied to wood cellulose. Professor Gray’s research showed that cellulose crystals in water suspensions align spontaneously in a specific pattern, in turn creating unique optical properties. Like the iridescent wing sheaths of a beetle, films of these aligned cellulose crystals can change colour depending on the angle from which they are viewed. This discovery has extended the boundaries of the uses of forest raw material and in so doing has created the potential for a series of new forest industry products.

Professor Gray’s findings have inspired researchers all over the world to intensify their studies on nanocellulose in general, paving the way for future business opportunities in the forest industry. The liquid crystalline behaviour of hydrolyzed cellulose suspensions was first reported as early as 1951 by Bengt Rånby at Uppsala University in Sweden and subsequently in 1959 by Robert Marchessault at McGill University.

The Marcus Wallenberg Prize, which is worth SEK 2 million (approximately $320,000), has been awarded by the Marcus Wallenberg Foundation for Promoting Scientific Research in the Forest Industry since 1981. The mission of the Prize is to recognise, encourage and stimulate path breaking scientific achievements which significantly contribute to broader knowledge and / or technical development within the forest industry.

For further information, please see the website of the Marcus Wallenberg Prize.