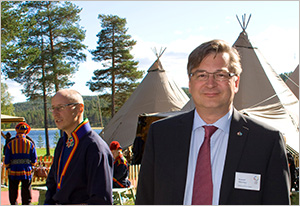 Ambassador Macartney at the opening of the Sami Parliament. 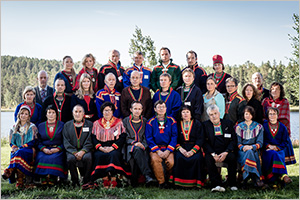 Ambassador Kenneth Macartney attended the ceremonial opening of the sixth session of the Sami Parliament in Jokkmokk on 28th August. More than 200 guests were present, including H.M. King Carl XVI Gustaf, Minister for Rural Affairs Eskil Erlandsson, Minister for Trade and Minister for Nordic Cooperation Ewa Björling and Chairman of the Parliament of Greenland Lars Emil Johansen. Speaking at the opening, Ambassador Macartney recognised the importance of traditional ways of life and referred to Canada’s work on helping the North realise its potential as a healthy, prosperous and secure region.

This year marks the 20th anniversary of the Sami Parliament of Sweden, established in 1993 as a publicly-elected body and state agency representing the 20,000 Sami of Sweden. The Parliament comprises 31 members elected every four years by registered Sami voters, with the most recent election taking place on 19th May 2013.

Canada has long-standing links with the Sami Parliament and Sami society. The Honourable Leona Aglukkaq, Minister for the Environment and Minister for the Arctic Council, met with members of the Sami Parliament during the Arctic Council meeting in Kiruna in May 2013 and during her visit to Stockholm in December 2012. Numerous exchanges between First Nations in Canada and the Sami people have taken place over the years, for example through the collaboration between Vilhelmina Model Forest in Västerbotten County and Prince Albert Model Forest in Saskatchewan which has been supported by the Embassy of Canada to Sweden.

In May 2013 Canada assumed the chairmanship of the Arctic Council for a two-year period. The theme of Canada’s chairmanship is “development for the people of the North,” with a focus on responsible Arctic resource development, safe Arctic shipping and sustainable circumpolar communities.

For further information on the Sami Parliament, please visit the Parliament’s website.