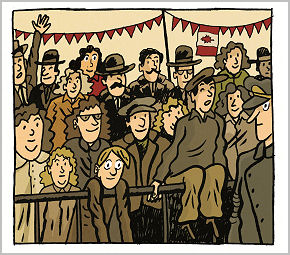 Canada will be the theme country at the Stockholm International Comics Festival 2014, which will take place from 17th-18th May at Kulturhuset Stadsteatern in Stockholm.

Canada has been one of the most interesting comic book countries in the world since the early 1990s, particularly in terms of the alternative scene. Confirmed guests at the festival are Seth (‘Palookaville’, ‘It’s a Good Life if You Don’t Weaken’, ‘Clyde Fans’), Kate Beaton (‘Hark! A Vagrant’), Philippe Girard (‘Killing Velazquez’, ‘Obituary Man’), Dakota McFadzean (‘Other Stories and the Horse You Rode in On’), Faith Erin Hicks (‘Friends with Boys’, ‘Demonology 101’), Canadian-Swedish author Rene Engström (‘Anders ♥ Maria’) and publishers Peggy Burns and Tom Devlin from the legendary Montreal-based publishing house Drawn & Quarterly.

Other international guests at the festival include Olivier Martin and Sylvain Runberg from France, Erik Kriek from the Netherlands, MaGnUs from Uruguay, Jaromir 99 and Johana Ziková from the Czech Republic, Dominique Maricq from Belgium, kuš! from Latvia and a large delegation from Finland.

2014 is the sixteenth edition of the Stockholm International Comics Festival, the largest celebration of comics as an art form in Sweden, and one of the themes for this year’s festival is representation: how are issues such as gender, ethnicity and culture represented in comics and among the people who create them?

The festival offers a wide range of activities such as exhibitions, workshops, master classes, film screenings and the heart of the festival, the Small Press Expo (SPX). SPX is a comic book market for over 200 exhibitors featuring both independent and established publishers, comic book associations and representatives from comic book schools and shops.

For further information, please see the festival website (in Swedish only).