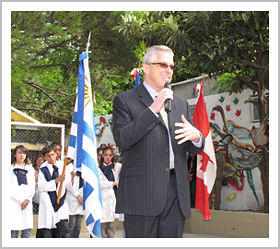 Ambassador of Canada Alain Latulippe during his speech on occasion of the celebration of the "Modernism in Canadian and Uruguayan Painting" project, at the Canada school

In Uruguay it is customary that public schools are named after countries. Embassies collaborate with the school that carries their name. Consequently, the Embassy of Canada to Uruguay has a long-standing relationship with two public schools that have the name "Canada".

In an underprivileged area of the city of Montevideo, a Canada school (School nº 174 Canada) launched a socio-artistic project called «Modernism in Canadian and Uruguayan Painting».  The main objective was to support educational development and provide an early opportunity for youth to engage in artistic expression.

The project allowed students to feel, explore and communicate through artistic expression, while improving their environment through art workshops. Uruguayan artist Daniel Tomassini, who initiated the youth to the marvels of Canadian and Uruguayan painters, volunteers his time to direct the workshops. Mr. Tomassini is a Uruguayan artist who studied the art of Riopelle in Canada and has a long standing relationship with the Embassy of Canada.

A modest contribution from the Canada Fund for Local initiatives, managed by the Canadian Embassy in Montevideo, allowed for the purchase of the materials necessary for the development of the project's activities.

The School Headmaster, Mr. Julio Grau, the artist Mr. Daniel Tomassini, and the Canadian Ambassador, Mr. Alain Latulippe,  as well representatives from the Primary Education National Council, joined children and their parents for a moving ceremony at which music and dancing were performed.