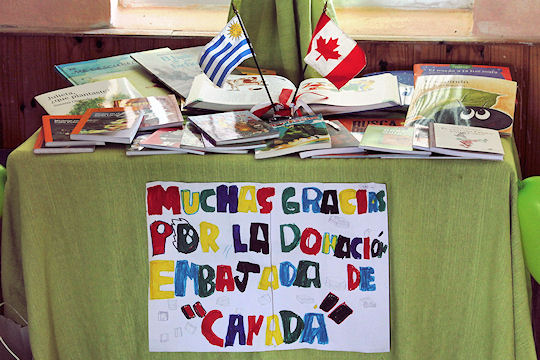 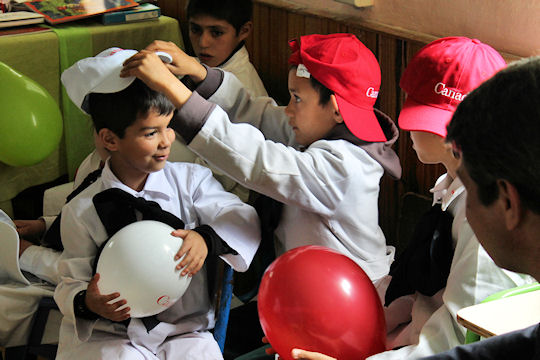 The students of “Canada” School playing with their red and white balloons and Canada hats. 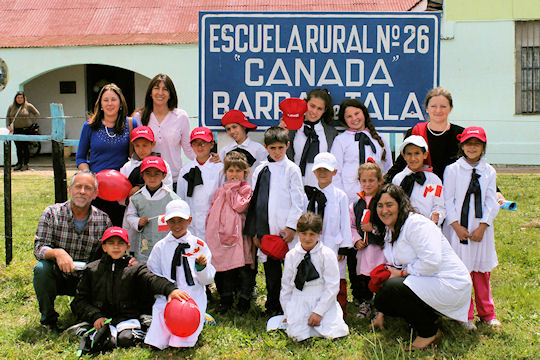 Though the right to education is enshrined in the 1948 Universal Declaration of Human Rights and guaranteed by the 1989 Convention on the Rights of the Child, many children around the world still struggle to access basic education. Canada supports education through education programs in developing countries, including in rural Uruguay.

In 2000, rural school n º26 in Uruguay was renamed “Canada School” in recognition of the Embassy of Canada to Uruguay’s longstanding support for the school.  It is one of three other schools in Uruguay named after Canada due to the Embassy’s collaboration with those schools.

One of the common barriers to obtaining basic education is outdated or low quality teaching and learning materials.

Canada’s commitment to global education was recently acknowledged through a book donation to rural school n º26 which included various classics of Uruguayan literature authors such as Juana de Ibarbourou, Roy Berocay and Horacio Quiroga. The books were hand delivered by the Canadian Ambassador to Uruguay, Claire Poulin and the embassy staff who also took the chance to promote education in rural areas.

The donated books will serve as a long lasting source of knowledge for the rural students who would otherwise not have access.

The children greeted the Ambassador and Embassy staff with great enthusiasm as they received red and white balloons and Canadian flags. Students shared poems and performed Uruguayan traditional dances. The visit concluded with a friendly trivia contest about Canada and prizes of Canadian hats for the students.

Ambassador Poulin concluded the day with a message of hope and wisdom to the students, encouraging them to follow theirs studies as long as possible from primary school until university.

Canada hopes that children of all circumstances will have complete access to quality and free education so that they may pursue their desires.