Welcome to Canada’s Embassy in Zimbabwe, where we are responsible for Canada’s relations with Angola, Botswana and Zimbabwe as well as the Southern African Development Community (SADC). I am pleased and honoured to represent Canada and hope to deepen our relations with the region.

Canada has enjoyed a decades-long relationship with Zimbabwe, Botswana and Angola.  Upon independence, Canadians of all stripes came to Zimbabwe to work with Zimbabweans in order to facilitate its development.  Since then, many Zimbabweans have studied in Canada and brought their skills back to Zimbabwe.

In Angola, Canada played an important role in the Angolan peace process in the 1990s and that peace has helped to strengthen the growing economic ties between our two countries.

Canada has had warm relations with Botswana since its independence in 1966.  Botswana is an important regional and multilateral partner for Canada, based on shared values and growing prosperity.

Canada is deeply committed to promoting the rights of women and girls. Women’s rights are human rights. As part of Canada’s Feminist Foreign Policy, our embassy is working improve the lives of women and girls, such as through support for efforts to put an end to child marriage. Our countries share deep people-to-people linkages – and I hope to continue to foster them.

Southern Africa has made strides over the past two decades in the advancement of democracy, the rule of law, good governance, human rights and fundamental freedoms.  Canada supports this progress, and hopes to see greater cooperation both bilaterally and through SADC in order to advance respect for human rights and democracy in all member states. We believe that there is no greater driver of economic growth and human well-being than the respect of the fundamental rights of all citizens.

Boosting commercial relations is a priority and our Trade Commissioner Service is at the disposal of Canadian companies seeking to conduct business overseas. The markets in Angola, Botswana and Zimbabwe offer interesting opportunities in a range of sectors including infrastructure, extractives, oil and gas, information technology and agriculture.  Please contact us at HRARE-TD@international.gc.ca for commercial enquiries.

For Canadians living in or visiting Angola, Botswana or Zimbabwe, I encourage you to visit the Government of Canada’s travel website. I would strongly recommend that you register with the Embassy. In case of emergency, registrants receive real-time consular alerts and information. I would also recommend that you download the Government of Canada’s Travel Smart app from iTunes or Google Play.

Passports and consular services in Zimbabwe and Botswana can be accessed from the Embassy’s consular section in Harare and Canadians in Angola may receive assistance via Canada’s Consulate in Luanda headed by an Honorary Consul. Should you require emergency assistance after business hours, you can contact our Emergency Watch and Response Centre by calling the Embassy of Canada in Harare and following the instructions. You may also call the Emergency Watch and Response Centre in Ottawa at 613-996-8885 or by e-mail (sos@international.gc.ca) for 24/7 assistance.

Please explore this site and provide us with feedback on how we can best assist you. Our e-mail address is hrare@international.gc.ca. I look forward to engaging you and invite you to follow us on Twitter and Facebook.

René Cremonese (BA [Political Science], University of British Columbia, 1982; Certificate of French Studies, University of Strasbourg, 1983; MA [Political Studies], Graduate Institute of International and Development Studies, Geneva, 1985) began his career with the Department of External Affairs in 1987 as a liaison officer in the Summits Management Office. Since then, Mr. Cremonese has held a variety of positions within the department, with a particular focus on the Asian and Oceania regions.

Mr. Cremonese is married to Mary Jean Comfort.  They have two children, Elena and Marc. 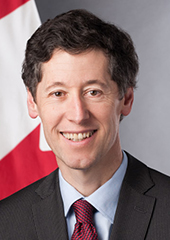 Embassy of Canada to Zimbabwe, Angola and Botswana